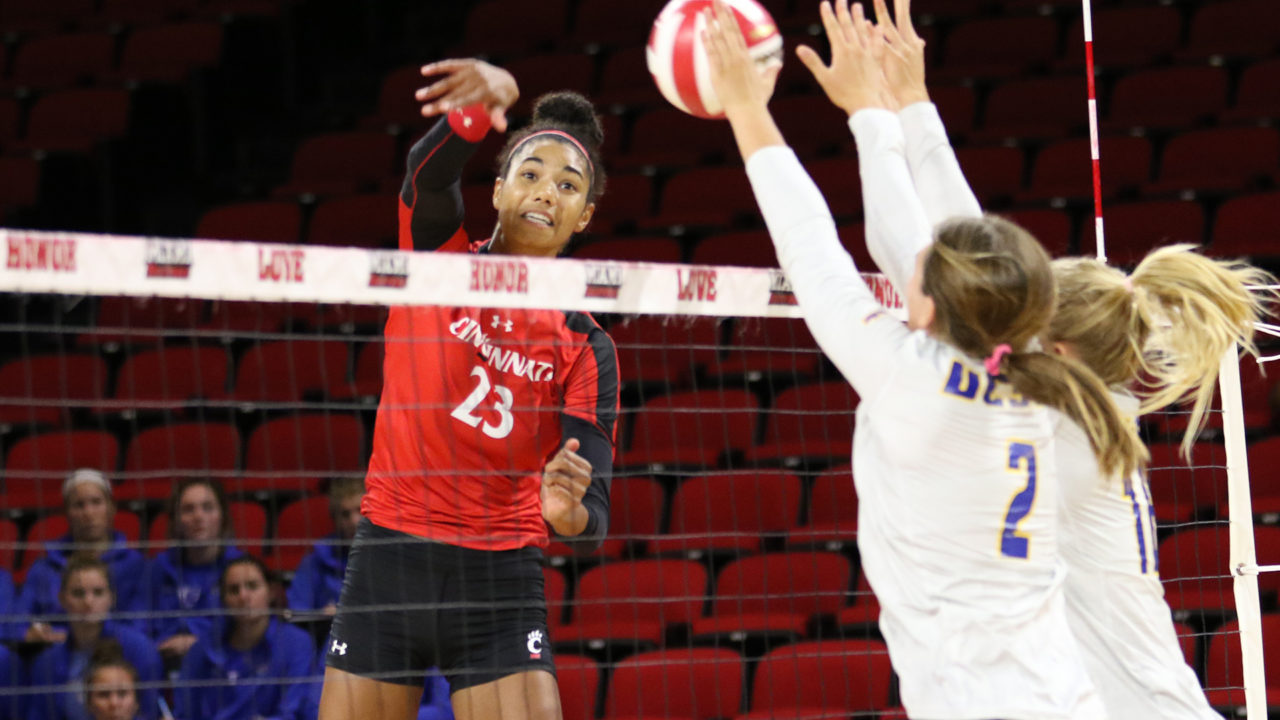 This week's VolleyMob Player of the Week, Cincinnati's Jordan Thompson, was all over the stat sheet, racking up more than six kills and three digs per set, while hitting .333 in three wins as she led her team to a 3-0 mark.  Current Photo via Cincinnati Athletics

This week’s VolleyMob Player of the Week was all over the stat sheet, racking up more than six kills and three digs per set, while hitting .333 in three wins as she led her team to a 3-0 mark.

Cincinnati’s Jordan Thompson averaged a conference-best 6.57 kills per set, while hitting .333 and earning three double-doubles. The redshirt junior outside hitter’s stat line also included 3.07 digs, 0.50 services aces (7) and 0.50 blocks per set. She hit .364 on Saturday with a American Athletic Conference four-set record 31 kills in a 3-1 win over Colorado State. The Edina, Minnesota, native returned to the court later in the day, recording 29 kills, 19 digs and a .294 hitting percentage in a 3-2 win over TCU. She reached the 30-kill mark again on Sunday, knocking down 32, while hitting .343 with four service aces and 10 digs to pace her team to a second-straight five set win, this time over Florida State.

Averaged 6.00 kills per set to go along with a .291 hitting clip and 2.08 digs per set at the Colorado State Tournament; posted 13 kills, four digs and two aces, while hitting .175 vs. Florida State; notched 28 kills, seven blocks, eight digs and an ace, while hitting .306 vs. Cincinnati; posted career-high 31 kills to go with 13 digs and a block while hitting .349 at Colorado State; became the  first TCU volleyball player to record at least 30 kills in a match since Amy Atamanczuk put down 30 kills against Cal State Fullerton on September 16, 2000; also made good on 49 of 50 (98 percent) of her serve reception chances; named Big 12 Rookie of the Week for the second straight week

Averaged 6.57 digs per set and notched a .934 reception percentage through a 2-1 weekend in Baton Rouge, Louisiana, to lead all defensive specialists across the American Athletic Conference; named the Tiger Classic Best Defender for her performance; tallied 34 digs against Duke before pacing her team to a pair of five-set wins over Texas A&M Corpus Christi and LSU; recorded 28 digs against the Islanders and 30 against the Tigers. American Athletic Conference Defensive Player of the Week

Averaged 11.07 assists and 3.80 digs per set; named the MVP of the Creeds & Crests Classic after leading Texas State to a perfect 4-0 week; recorded double-doubles in all four matches and finished with 166 assists (11.07/set), 57 digs (3.80/set), 11 kills (0.73/set), 10 blocks (0.67) and eight aces (0.53/set); began the week with a 47-assist, 24-dig performance against UTSA, and the dig total was the highest by a Bobcat setter since 2007; recorded 39 assists, 10 digs, four blocks and three aces in a win over James Madison; concluded her tournament with 44 assists, 13 digs, five kills, three aces and three blocks in a triumph over Abilene Christian; Sun Belt Conference Setter and Freshman of the Week

VolleyMob Player of the Week