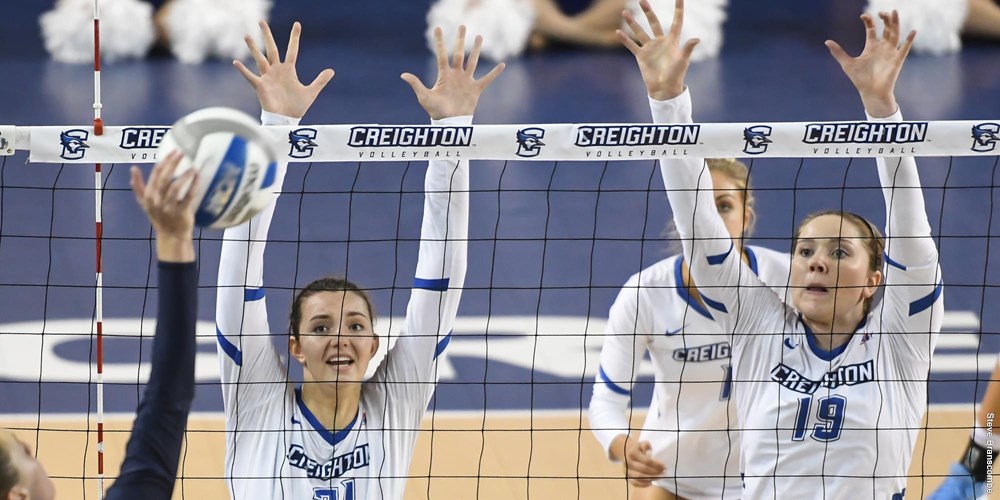 Providence defensive specialist Mackenzie Taylor was named BIG EAST Freshman of the Week as she helped the Friars to a 3-0 weekend.

Creighton middle blocker Megan Ballenger was named the Most Valuable Player of the SMU DoubleTree Classic after helping the Bluejays to three 3-0 sweeps to complete a perfect week. Ballenger averaged 3.89 points, 3.44 kills and 0.78 blocks per set while hitting .529 percent. Ballenger opened the weekend with eight kills and three blocks on .583 hitting against Arkansas State. In the tournament closer against host Southern Methodist, Ballenger hit an impressive .609, tying her career-high 16 kills with just two errors. The junior middle blocker also had four blocks in the match.

🏆🏅 🎉
Congratulations to Megan Ballenger on being named the @BIGEAST Offensive Player of the Week!#GoJays pic.twitter.com/hltlJ9i23M

Naomi Hickman, also a middle blocker for Creighton, earned Defensive Player of the Week honors after averaging 1.78 blocks per set to help the Bluejays sweep three opponents last weekend at the SMU DoubleTree Classic. Hickman opened the tournament with five kills in 10 errorless swings and tied her career-high with six blocks against Arkansas State. Hours later, she broke her personal best with seven blocks against North Carolina State.  In the tournament finale, Hickman had three blocks, three kills and a dig. One of her blocks came to fight off a set point opportunity for SMU in the second set. In addition to her blocking prowess, Hickman also added 10 kills, two aces, one dig and one assist during the week.

🏆🏅 🎉
Congratulations to Naomi Hickman on being named the @BIGEAST Defensive Player of the Week!#GoJays pic.twitter.com/FSk8701BCf

Providence freshman Mackenzie Taylor helped the Friars to a 3-0 week at the Providence Invitational as she marked 5.18 digs per set against Massachusetts Lowell, Fairleigh Dickinson and Brown for 57 total digs. Taylor also accumulated 12 assists in the winning weekend. Taylor notched 24 digs in the four-set victory over Brown in the tournament final after a 19-dig performance in a sweep over FDU and 14 in four sets against UMass-Lowell.

Congrats Mac on being named @BIGEAST FRESHMAN OF THE WEEK! pic.twitter.com/IzvZCb922e

Higareda was named to the All-Tournament Team at the Georgetown Classic where she set the Hoya career record for digs (1,632 after the weekend). She posted 20-plus digs in two matches with 21 against Penn and 25 in the record-breaking performance against UNC Wilmington. She also marked nine aces on the 2-2 weekend for the Hoyas.

Barber received MVP awards for the Friar Classic as she led the tournament in assists recording 129 for the 3-0 Friars (11.73 per set). Against Brown she posted a double-double with 49 assists and 13 digs. For the tourney, she also tallied nine kills on a .309 attack percentage, five aces and seven blocks.

Di Maulo was named the MVP of the Cornell Invitational where the Red Storm finished the weekend 2-1 with a 3-0 win over Siena, a five-set loss to Buffalo and a three-set sweep over host Cornell. Di Maulo averaged 9.50 assists, 1.40 kills and 2.90 digs per set on .308 hitting with a double-double in the Buffalo loss (14 digs, 45 assists).

Olsonoski was named to the All-Tournament team of the Kristen Dickmann tournament in Annapolis, Md. Olsonoski averaged 2.20 kills and 1.10 blocks per set on .426 hitting as VU went 2-1, sweeping Dartmouth and Navy but losing in five sets to Alabama.