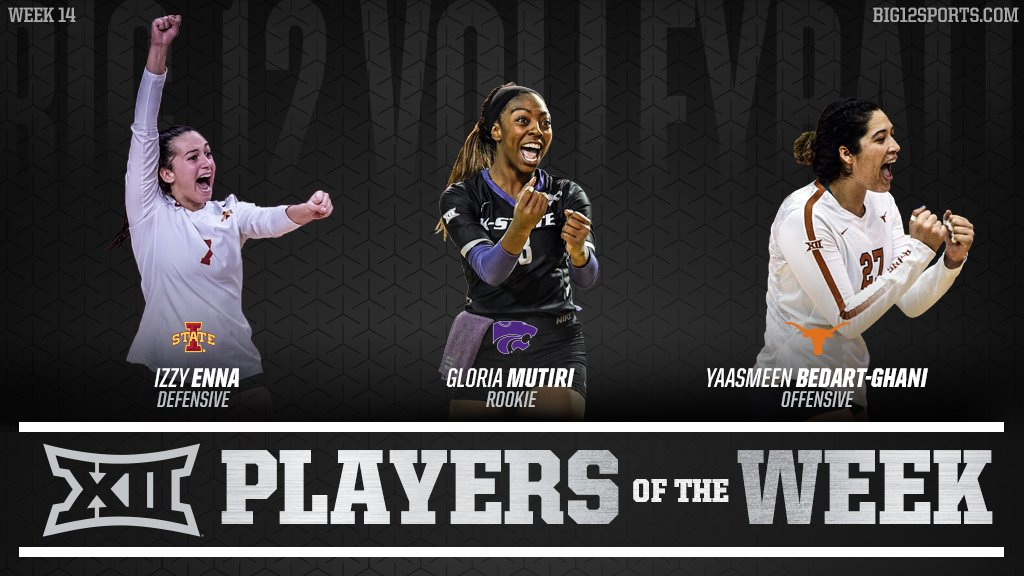 Bedart-Ghani, Offensive Player of the Week, led the Big 12 in hitting percentage last week (.639) behind two over .500 performances. The senior totaled 24 kills on 36 attempts for a .556 hitting clip at Texas Tech and .722 hitting percentage against West Virginia, with only one error in both outings.

Yaazie Bedart-Ghani has been named Big 12 Offensive Player of the Week!

On the defensive end, Enna earned Defensive Player of the Week honors after she led ISU with 11 digs in a sweep over Kansas. She followed that up by tying her career-high of 19 digs vs. Texas Tech. Enna’s 5.00 digs per set led the Big 12 for the week.

K-State’s Mutiri was named Rookie of the Week for the second time this season after hitting .419 on 15 kills in the Wildcats’ four-set win at TCU. In that match, the freshman also collected 11 digs for her third double-double of the season. Her 3.75 kills per set and .419 hitting efficiency were tops among Big 12 freshmen last week.

She takes her second @Big12Conference Rookie of the Week honor after her double-double (15 kills, 11 digs) in #KStateVB's four-set win at TCU last week!

This week’s award marks the third all-time for Bedart-Ghani, first Offensive Player of the Week, and first all-time for Enna. Mutiri is one of four student-athletes to have won Rookie of the Week honors at least two times this season.