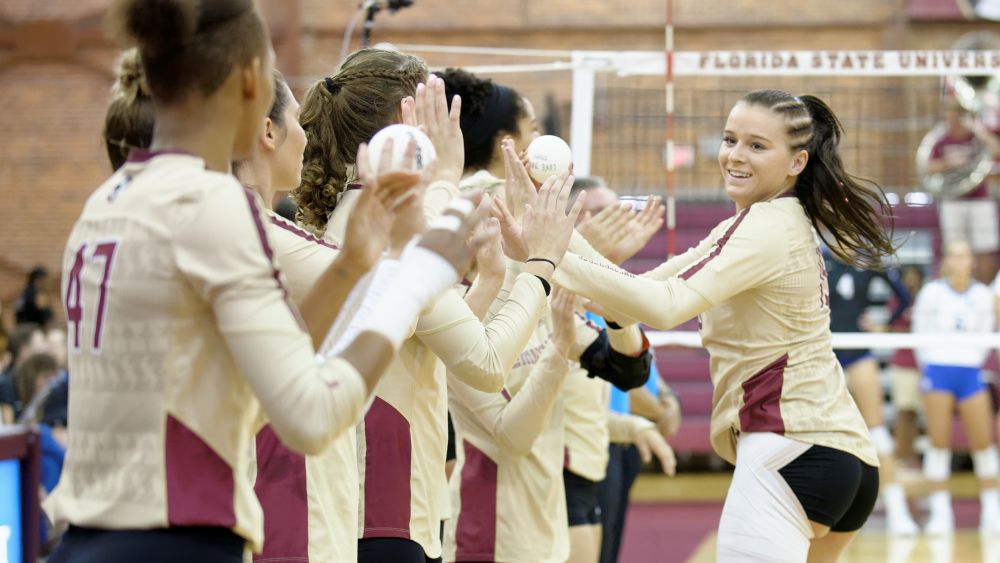 Florida State junior outside hitter Payton Caffrey has been named the 2018 ACC Volleyball Player of the Year and headlines the All-ACC Team. Current Photo via Florida State Athletics

GREENSBORO, N.C. – Florida State junior outside hitter Payton Caffrey has been named the 2018 ACC Volleyball Player of the Year and headlines the All-ACC Team announced Monday. The awards were based on a vote of the league’s 15 head coaches, who could not vote for their own student-athletes.

There were two repeat winners, as ACC Champion Pitt’s Dan Fisher took home Coach of the Year honors for the second straight season, and Louisville’s Wilma Rivera earned her second consecutive Setter of the Year laurels.

Notre Dame libero Ryann DeJarld was named Defensive Player of the Year, while Polina Shemanova, Syracuse’s rookie outside hitter, was tabbed as the Freshman of the Year.

Caffrey leads the conference in kills per set at 4.36, and points per set with 4.92. The Chuluota, Florida, native totaled 462 kills and 521.5 points on the season, both best in the league. Caffrey is the first Seminole since Ashley Neff in 2012 to win the award.

The awards just keep piling up for @paytonjcaffrey…

Rivera’s second consecutive Setter of the Year honor marks the third time in the last four years the award has gone to a Louisville Cardinal, with Katie George receiving the honor in 2015. Rivera, a Louisville native leads the ACC in assists per set with 11.12. She ranks second in the league with 1,212 total assists.

Congrats to Wilma Rivera for earning her second consecutive Setter of the Year accolade! #L1C4

DeJarld is the first Notre Dame student-athlete to be named Defensive Player of the Year. The senior from Chicago ranks first in the ACC in digs per set with 5.02, and total digs with 532. DeJarld leads an Irish squad that holds the top spot in the league in digs per set (16.25), total digs (1723) and opponent hitting percentage (.164).

And your 2018 @ACCVolleyball Freshman of the Year is…

Fisher led Pitt to its second straight ACC Championship, and first outright ACC title in program history. In his sixth year leading the Panthers, Fisher has guided Pitt to its third straight NCAA Tournament appearance, and has seen four players named to the 2018 All-ACC Team.

For the second consecutive season, @fishercoach is @ACCVolleyball Coach of the Year!

Eleven different schools are represented on the All-ACC Team, led by Notre Dame’s five honorees. Four student-athletes were recognized from Pitt, followed by three from Clemson, Duke, Florida State, Louisville, NC State and Syracuse. Georgia Tech and Miami each had two selections, and Virginia Tech had one.

Five ACC teams earned berths in the 2018 NCAA Division I Volleyball Championship: Duke, Florida State, Louisville, Pitt and Syracuse. The first round of play is set for Nov. 29 and Nov. 30.