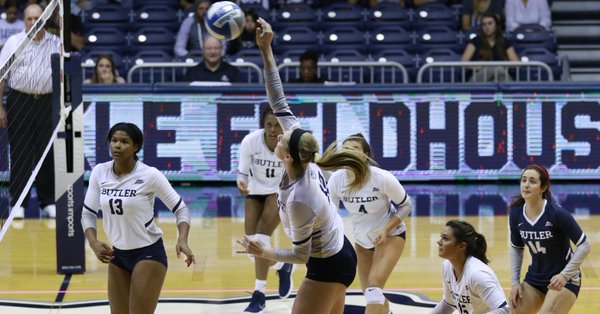 All BIG EAST volleyball teams have made it to the halfway point of the conference season, except Creighton and Providence who will play their ninth league match Thursday.  Current Photo via Butler Athletics

NEW YORK – All BIG EAST volleyball teams have made it to the halfway point of the conference season, except Creighton and Providence who will play their ninth league match Thursday. Creighton leads the way on an eight-match unbeaten streak and still undefeated in conference play. The Bluejays remain 10th in the AVCA Coaches Poll for a sixth straight week, beginning with the poll released on Sept. 10.

Marquette continues to slide up the poll, improving to No. 18 nationally, which is the highest ranking in program history for the Golden Eagles. Marquette, which has swept its last seven opponents, sits just behind Creighton in the BIG EAST standings at 8-1. Georgetown has sole possession of third place in the conference with a record of 6-3, and St. John’s is alone in fourth at 5-4.

Matches begin on Thursday with Butler (6-15, 3-6 BIG EAST) traveling to Providence (7-12, 1-7) starting at 6 p.m. ET. The Bulldogs are the conference leader in blocks per set with 3.11, and senior Bri Lilly leads the league in blocks at 1.63 per set. Friar sophomore Allison Barber is fourth in the conference in assists with 9.77 per set.

No. 10 Creighton (16-4, 8-0) hosts Xavier (6-14, 4-5) with the match beginning on Thursday at 8 p.m. The Bluejays lead the league in opponent hitting percentage at .163, while junior Madelyn Cole is the conference assists leader with 10.63 per set. Musketeer Audrey Adams’ hitting percentage of .421 is currently the best in the BIG EAST.

Four matches highlight the Saturday slate, beginning with Xavier squaring off against Providence in the afternoon at 1 p.m. Later in the day, St. John’s welcomes Georgetown at 5 p.m. for a battle between the third and fourth-place teams in the league. Butler heads out to Omaha to take on No. 10 Creighton at 6 p.m., and Villanova makes the short trip to Seton Hall at 7 p.m.

No. 18 Marquette visits Northern Iowa, which is receiving votes in the latest AVCA poll, for a non-conference match-up on Sunday at 3 p.m.

BUTLER at PROVIDENCE at 6 p.m.

GEORGETOWN at SETON HALL at 7 p.m.

XAVIER at PROVIDENCE at 1 p.m.

VILLANOVA at SETON HALL at 7 p.m.

All times are Eastern.