Wisconsin middle blocker Dana Rettke was a dual award winner, grabbing Big Ten Player and Freshman of the Week accolades after leading the team against Maryland and Minnesota. The Riverside, Illinois, native accounted for 5.1 kills and 1.1 blocks per set, while hitting at a .642 clip. She kicked off the weekend with a 14-kill, four block effort, while hitting .632 against the Terrapins. Rettke chipped in a career-best 22 kills on an errorless .647 hitting effort to go with four blocks against the Gophers. The player of the week honor is her second, while the rookie nod is her sixth of the year.

Minnesota’s Dalianliz Rosado picked up Defensive Player of the Week honors with 5.14 digs per set against Ohio State and Wisconsin. The senior libero also chipped in six assists and made good on all 32 of her serve reception chances on the week. In the sweep of Ohio State, the Morovis, Puerto Rico, native notched 18 digs and two assists. In the four-set win over Wisconsin, Rosado pulled up 18 digs and dished out four assists. 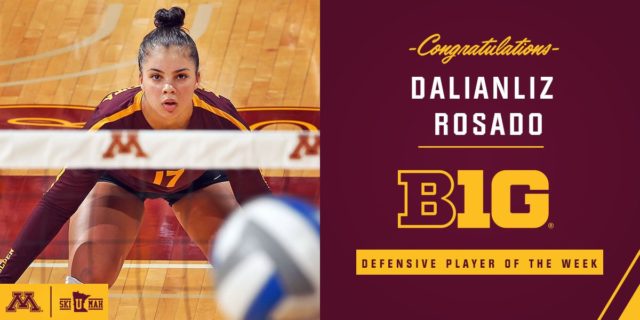 Michigan State setter Rachel Minarick earned her fifth career Setter ofthe Week nod after dishing out 13.9 assists per set in wins over Michigan and Maryland. The Naperville, Illinois native, registered a 58-assist, 11-dig double double and helped the Spartans to a .310 hitting effort against the rival Wolverines. Saturday brought the senior her 4,000th career assist with 39 helpers in the sweep of Maryland. 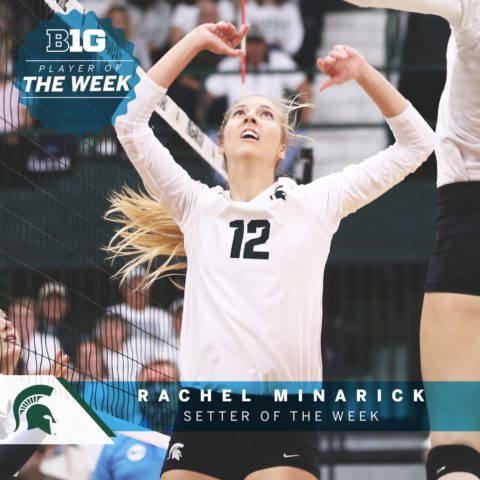