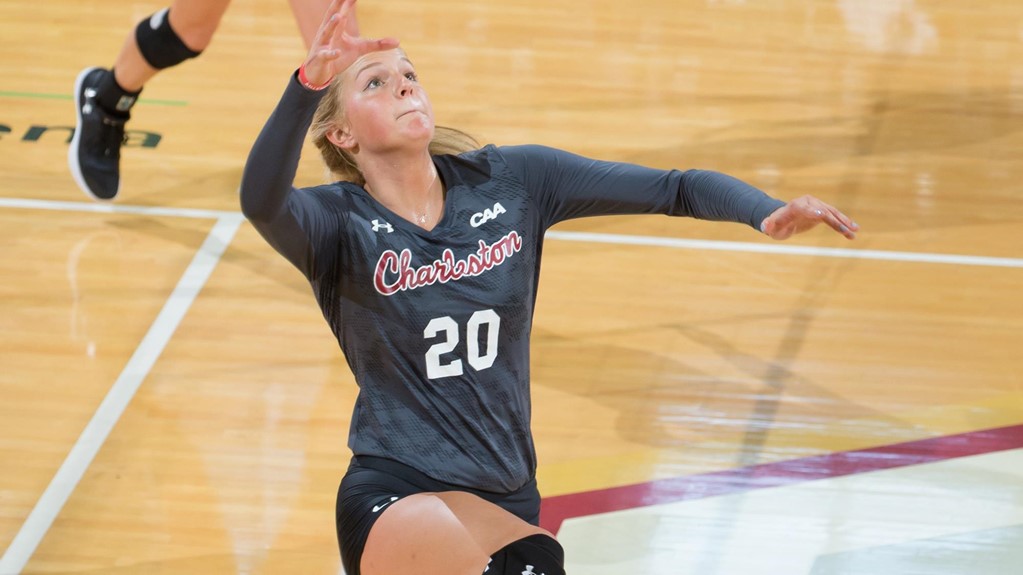 CHARLESTON, S.C. – In a rare Monday night battle between NCAA RPI top-70 programs, Charleston (RPI: 60) downed James Madison (RPI: 64) in four sets (25-21, 23-25, 25-17, 25-16). The Cougars won their 9th straight match, which is their longest streak since 2014. They needed a career night from senior middle blocker Krissy Mummey to hold off a determined James Madison squad and keep a strong hold on first place in the Colonial Athletic Association.

Mummey needed only 30 swings to set her career-high of 22 kills and hit .667 on the evening. She reclaimed her hold on top of the CAA for hitting percentage with last night’s performance pushing the number to .410 on the season. Three other Cougars hit in double figures on Monday night. Devon Rachel owned a double-double with 15 kills and 13 digs. Lauren Freed added 12 kills to go along with her 9 digs. Rounding out the double-digit kill party was reigning CAA offensive player of the week Kennedy Madison with 10 kills and a match-high 6 blocks. Setter Allison Beckman ran an efficient offense (.265) with a double-double of her own; she had 54 assists and 12 digs. Libero McKala Rhodes dug a team-high 14 balls, while fellow defensive specialist Logan Manusky finished with 13 digs.

James Madison threw a block party—-the Dukes recorded their 11th match of the season with double digit blocks, which kept them in the match against league-leading Charleston. 10 of their 14 blocks came in the second set alone. As of the writing of this article, JMU averaged 2.8 blocks per set, which ranks them 17th nationally. Three Dukes had 5 blocks each, Bryn Recker, M’Kaela White and Taylor Gail. Leading the Dukes offensively was Recker with a team-high 16 kills, hitting .368 and adding 14 digs for JMU’s lone double-double. Libero Taylor Austin led all players with 15 digs. JMU’s 6-2 offense was directed by Tilbe Yaglioglu and Sarah Martin, with 19 and 18 assists respectively.

CHARLESTON, S.C. — Senior Krissy Mummey (Hudson, Ohio) set a new career-high with 22 kills and a .667 hitting percentage to pace four Cougars in double figures, and Allison Beckman (Apex, N.C.) recorded a double-double to lead the College of Charleston volleyball team to its ninth straight win with a 3-1 victory over James Madison on Pep Supper Monday evening.

CHARLESTON, S.C. – A double-double performance from junior Bryn Recker was not enough as the James Madison volleyball team suffered its fourth loss of the season as the College of Charleston topped JMU in four sets on Monday evening inside the TD Arena. The Dukes fall to 15-4 overall and 6-4 in Colonial Athletic Association play. The Cougars move to 21-4 overall and 10-1 in conference play, extending their win streak to nine straight.

DOUBLE-DOUBLE NIGHT FOR RECKER
Junior Bryn Recker was all over the court tonight as she recorded her sixth double-double of the season. The Austin, Texas, product has recorded 15 double-digit kill performances this season along six matches where she has tallied double-digits in digs.

BLOCK PARTY
For the eleventh time this season, JMU recorded double-digit blocks as the Dukes tallied 14 total against the Cougars. JMU has out-blocked its opponents 202.0 to 94.0, averaging 2.8 blocks per set, over the first 19 matches of the season. Seven Dukes have tallied double-digit blocks as the team is led by sophomore M’Kaela White‘s 103 total. The sophomore currently ranks first in the league by averaging 1.51 blocks per set.