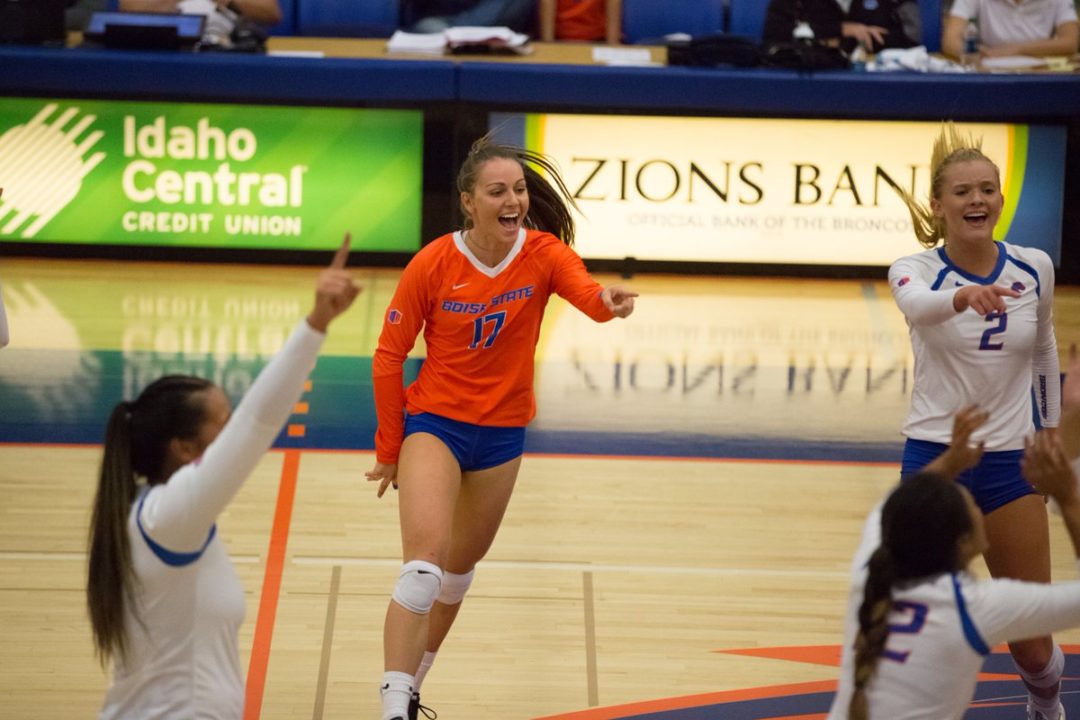 Boise State won its fourth straight match and moved to 3-0 in Mountain West play with a 17 block effort in a 3-1 road win over New Mexico on Thursday.  Current Photo via Boise State Athletics

ALBUQUERQUE, N.M. – Boise State won its fourth straight match and moved to 3-0 in Mountain West play with a 17 block effort in a 3-1 road win over New Mexico on Thursday.

New Mexico had its only positive hitting effort of the night in Set 1, managing a .114 effort, but that was enough to best Boise State, which committed 12 errors and hit just .042 in a 25-21 loss. The stanza featured 12 ties and two lead changes. A 4-0 run, including a pair of Walley putaways, gave Boise State a 9-6 lead. The Lobos scored five of the next seven to tie it up at 11, with help from three Twitty kills. New Mexico continued the rally another 5-2 run, grabbing the lead at 16-13 after three straight BSU hitting miscues. Back-to-back Bronco blocks knotted the score at 16, then the teams split the next 10 points laeding to a 21-all tie. The Lobos closed out the set on a 4-0 run, as three staight BSU errors set up a final kill by Carrasco.

Boise State started slow, dropping three of the first four points of Set 2, but quickly turned things around with a 14-2 run. The Broncos scored six in a row to start the rally, including two Walley kills and two Hayes blocks, before going on to the 15-5 lead. Up 10 again at 17-7, BSU wrapped up the win with an 8-1 run, including two aces by Bulda and three kills by Roberts. Walley earned the final kill to even the match.

The momentum remained with the Broncos after the intermission as the visitors cruised to an 8-1 lead and on to a 17-7 margin. Three Leake stuffs aided early, while five Lobo miscues and kills by four players helped lift to the 10-point advantage. Kills by Leake, Walley and Roberts made it a 12-point game 20-8. New Mexico slowed the Broncos momentarily with a 4-1 run of its own fueled by three errors and a Carson Heilborn ace. Boise State scored four in a row, incluidng a kill and a block from Walley,  to clinch the 25-12 win on a Maddi Osburn ace.

New Mexico scored five of the first seven points in Set 4, with two kills and a block by Spragg. Boise State turned the tables with an 8-0 run and pushed the lead to nine soon after at 17-8. walley tallied three blocks and two kills as the Broncos went up 10-5. Bulda and Hayes notched two kills apiece to give BSU the 17-8 advantage. The Lobos would get no closer than seven the rest of the way as errors piled up. The Broncos capped the four-set win with a pair of kills by Lewis.