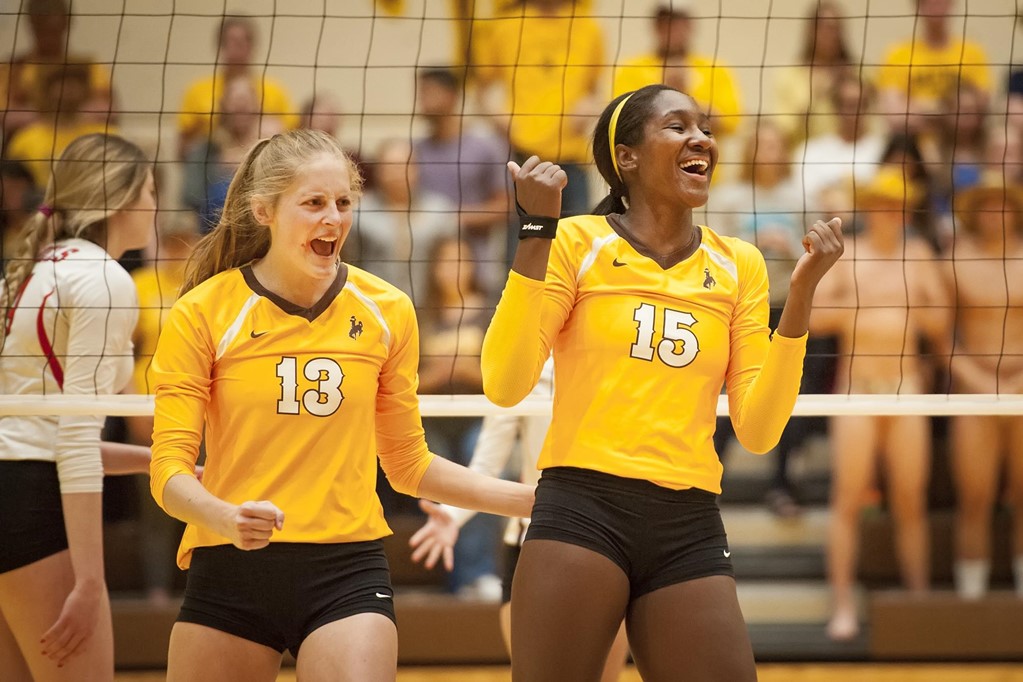 Both McBride and McArdle each had eight kills for the Brown and Gold, while freshman Marissa Harmon posted a match-high 34 assists. On the defensive side, junior Reed Copeland lead both teams with seven total blocks, as both senior Lily Austin and redshirt sophomore Cori Aafedt recorded double-figure digs.

Sitting in eighth place all-time in UW history, Copeland surpassed 400 career blocks while leading the Brown and Gold defense in Colorado Springs. The Federal Way, Wash., native now has 402 blocks and needs five to hold a share of seventh place in Cowgirl history.

With the first serve in Colorado Springs and then an attacking error from the Falcons, UW put itself on the scoreboard right away. A couple big blocks from Copeland and Traphagan set the tone early and back-to-back attacking errors from Air Force gave UW a 12-8 lead. Two-straight points thanks to a Cowgirl attacking error followed by a receiving error forced Wyoming to call timeout up, 19-16. Copeland recorded her 400th career block to put UW up, 21-18 before the Brown and Gold earned six of the next eight points for the win. Copeland led the way with five kills and four blocks in the opening set.

The Falcons offense came out as fierce as ever to open the second set. Air Force held a lead of 5-3 off a kill, only to see UW even the score at seven. Behind four-straight points for Wyoming, Air Force called timeout down, 9-12. UW used a number of errors to keep its lead throughout the second set. Air Force was then able to stick around with a couple kills late in the set, but a kill from McBride helped UW close the set, 25-21. At intermission, Wyoming held a .267 hitting clip compared to Air Force’s .167 and also held the advantage in total blocks (9.0-5.0). McArdle posted five kills in the second two, while McBride had three blocks.

Wyoming never fell behind in the third set until Air Force had a 15-14 lead. A back and forth match kept the Falcons within reach to begin the set. A kill from Traphagan moved UW’s lead to four, 12-8 and also prompted Air Force to call timeout in the third stanza. Air Force found themselves within one, 12-13 after its third service ace of the match and then the Cowgirls called timeout to recollect themselves with Air Force holding a two-point advantage, 16-14. After a couple even scores, Wyoming reclaimed the lead, 20-19 and ultimately never looked back. A set error from the Falcons gave UW the 25-20 win and the three-set sweep. While McBride and Lewis shined for the offense in the third set, Harmon ran it adding 12 assists.

Wyoming will continue its conference season on the road with two contests next week. UW will face Utah State on Thursday before traveling to Boise State on Saturday.

The Air Force volleyball team began the second week of Mountain West action with a 3-0 loss to Wyoming on Thursday, Sept. 28, in front of a capacity crowd at Cadet East Gym. The Falcons, who fell to 7-10 on the season (0-3 in conference play), were swept by the visiting Cowgirls in straight 25-20, 25-21, 25-22 sets.

Wyoming used an early 4-1 run to open the match, before freshman Cambria Galloway put down a kill and assisted on a block (Heineck) to bring the Falcons within one (3-4). Air Force remained within one after a kill from junior Lauren Heldt (8-9), but the Cowgirls used a 6-1 run to extend its advantage to six (15-9). Heineck stopped their run with a kill at the 15-10 mark, while Miksch sparked a 5-0 run by the Falcons that brought them back within one (18-19). The junior collected one kill and two aces during the run, while freshman Kathleen Medill and Heldt teamed up for a block and Ssozi recorded a solo stop. Heldt added two more kills, but Wyoming took the opening set by a 25-20 margin.

Conlan opened the second set with an ace and Air Force maintained an early advantage off of kills from Heineck, Miksch, Galloway and Medill. A block from Heineck and Ssozi broke an 8-all tie, but the Cowgirls rolled off the next five points to take a 13-9 lead. Miksch stopped the run with a kill, while Heineck helped the Falcons pull within two (16-18) with a kill and assisted block (Ssozi). Miksch collected a pair of scores in the final minutes, but the Cowgirls claimed the four-point victory (25-21).

Miksch posted the Falcons’ first offensive point of the third set, while Ssozi tallied a pair of kills to help Air Force erase a 4-2 deficit and tie the set at six. The Cowgirls scored six of the next eight points to take a four-point advantage (12-8), before Miksch sparked a 7-1 run by the Falcons to give Air Force its first lead of the set (16-14). The junior served up a pair of aces during the run, while Medill and Ssozi registered kills and Heineck and Heldt teamed up for block. Wyoming evened the set at 16-all and the squads traded the next six points, with Air Force retaking the lead off of scores off of kills from Heineck (17-16) and Ssozi (18-17). The Cowgirls strung together three points to take a 21-19 lead, but Miksch put down a pair of kills to keep the Falcons within one (20-21, 21-22). Heldt posted an additional kill (22-23), but Wyoming was able to claim the final two points to complete the sweep with a 25-22 win.

Air Force wraps up its four-match MW homestand on Saturday, Sept. 30, when it hosts 24th-ranked Colorado State at 1:00 p.m.