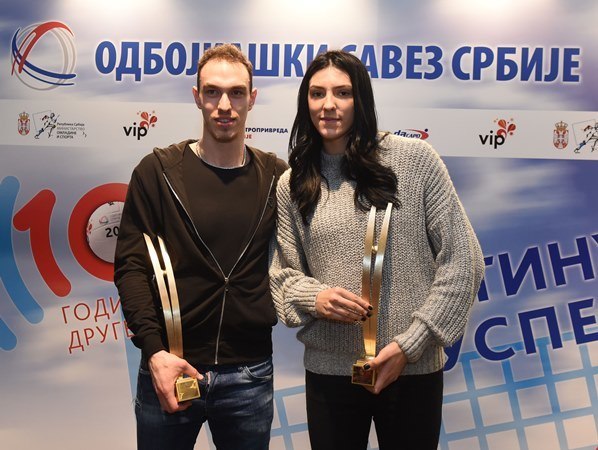 Marko Ivovic and Tijana Boskovic were named the best volleyball players of Serbia in 2016. Archive Photo via Serbian Volleyball Federation

Tijana Boskovic and Marko Ivovic have been named the best female and male Serbian indoor players of 2016, the organization announced in a ceremony last week in Belgrade.

The 6’5″ outside hitter was named the MVP and best outside hitter of the 2016 FIVB Club World Championships at just 19 years old playing for her club Eczacibasi VitrA.

Representing Serbia, she was the 3rd-highest scorer at the Rio Summer Olympic Games with 137 points in 8 games. She also averaged .33 aces/set in the tournament – second only to her teammate Milena Rasic among players whose teams advanced as far as the semi-finals.

“I am very happy for this award, especially because it came this year, when we achieved an incredible result at the Olympic Games in Rio,” Boskovic said.

Ivovic and the men’s team didn’t qualify for the Olympics, breaking a 16-year (5 Olympics) qualifying streak. They did, however, win the 2016 World League for the first time in the nation’s history, and Ivovic was named the MVP (and best outside hitter) of that tournament.

“This year we won the gold medal in the World League, the first in our history. I am proud of that and this prize will surely be an additional reason for me to contribute even more in the future to the success of our national team,” said Marko Ivovic.

The 26-year  old Ivovic re-joined the club Asseco Resovia Rzeszow in Poland this year, with whom he won the 2015 Polish Championship before spending a season in Russia.

Other Awards Given Out at the Ceremony: