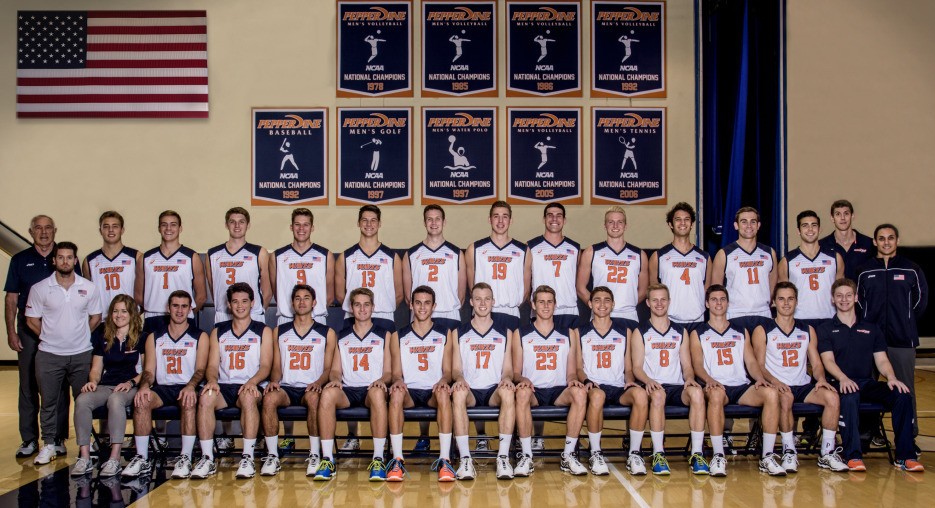 The No. 5 Pepperdine men’s volleyball program enters the 2017 campaign this week with the squad’s home opener against McKendree. ... Current Photo via Ron Hall/Pepperdine Athletics

The No. 5 Pepperdine men’s volleyball program enters the 2017 campaign this week with the squad’s home opener against McKendree.  The Waves then host Canada’s McMaster on Thursday and Friday in Firestone Fieldhouse

COVERAGE – Can’t make it out to the match? No problem! PepperdineWaves.com offers a wide variety of FREE options to follow along with all your favorite teams.  WaveCasts broadcasts all home matches for free on your computer or mobile device.  Veteran play-by-play announcer Al Epstein will once again serve as the voice of Pepperdine volleyball in 2017.  Links to any available live stats, video and audio can always be found by clicking on a particular event on the men’s volleyball schedule page at PepperdineSports.com.

KEY RETURNERS – The Waves return 17 members from the previous squad and lost only two key starters, rounding out the current team at 23-players.  Of the returners four plus the libero are returning starters, including redshirt-sophomore David Wieczorek.  Six-foot-eight, Wieczorek, earned a spot on the All-MPSF second team and All-Freshman teams last season, while also garnering OffTheBlock/Springbak, Inc. Fan Choice National Player of the Year in 2016.

Also returning is six-foot-seven senior middle blocker Mitchell Penning.  Penning has been a two-year starter in the middle for the Waves and has been strong in the classroom as well, picking up MPSF All-Academic honors in 2016.  Another returner from the outside is six-foot-four junior outside hitter Colby Harriman.  Primary libero Weston Barnes will also return.

NEWCOMERS – The team will welcome six newcomers including three freshmen and two transfers, and one new-but-old face as senior Kyle Suppes rejoins the squad.  Suppes was a member of the Waves’ team from 2013-15 seasons.  Junior transfers Alex Harthaller and Owen Yoshimoto, a redshirt junior, joined the team this fall.  Six-foot-six Harthaller will compete for an outside hitter position, while six-foot-two Yoshimoto is looking to make an impact in the back row.

OPPONENT NOTES: MCKENDREE – Last season, McKendree posted an 11-14 overall record, with a 6-11 Midwestern Intercollegiate Volleyball Association (MIVA) record.  The Bearcats went 2-7 at home, 8-7 on the road and 1-0 in a neutral setting.  The team clinched their first postseason berth in program history advancing to the semifinal round of the MIVA Tournament after upsetting No. 11 Ball State in the first round.  McKendree closed out the season after falling to the eventual national champion Buckeyes of Ohio State University 3-1 in their semifinal matchup.  This will be the first time the Waves and Bearcats go head-to-head.

OPPONENT NOTES: MCMASTER – McMaster is one of the premier Canadian teams currently in the middle of their season.  The Marauders have amassed an untarnished 6-0 record to start the campaign, including a straight-set sweep over returning NCAA national champions Ohio State on December 30.  The team is currently ranked No. 2 in Canada and is actively contending for the top-spot.