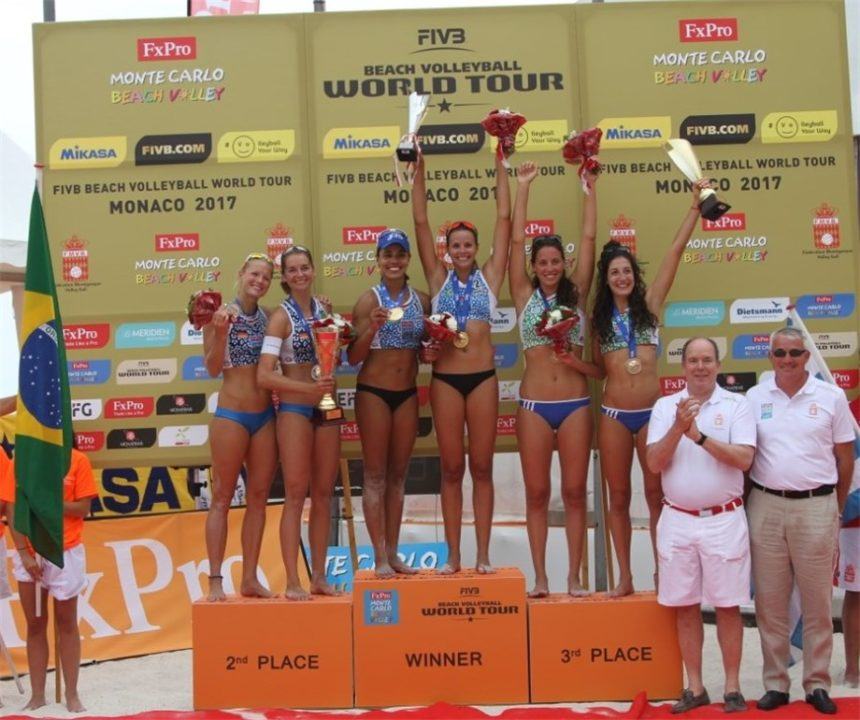 Brazilians Juliana Felisberta and Carol Horta won their first FIVB gold since pairing up this year, taking the top spot at the Monaco One-Star event in Monte Carlo on Sunday. Current Photo via FIVB

Brazilians Juliana Felisberta and Carol Horta won their first FIVB gold since pairing up this year, taking the top spot at the Monaco One-Star event in Monte Carlo on Sunday.

Juliana/Carol, whose previous best was a quarterfinal finish in Rio, topped Germany’s Kim Behrens and Anni Schumacher in a close three-setter for the title, winning 21-16, 21-15, 15-13. The Brazilians advanced to the final with a 21-13, 18-21, 15-13 win over New Zealanders Shaunna Marie Polley and Kelsie Wills.

It marked the second silver of the year for Schumacher and Behrens, following the Shepparton One-Star. The pair topped Greeks Panagiota Karagkouni and Konstantina Tsopoulou 21-13, 21-23, 15-5 in the semis.

Karagkouni/Tsopoulou then defeated Polley/Wills 21-15, 16-21, 15-9 for the bronze medal, in their first World Tour podium finish. The Monaco One Star marked the FIVB Tour debut for Polley/Wills,

Watch the final point of the Gold medal match here.

Karagkouni/Tsopoulou made their way to Sunday’s action with straight set wins over Tadva Yoken and Sigrid Simonsson of Sweden (21-11, 21-15) and Serbia’s Tijana Basic and Milena Matic (21-14, 21-15).