Bulldogs, Gamecocks Set to Tangle on SEC Network on Sunday 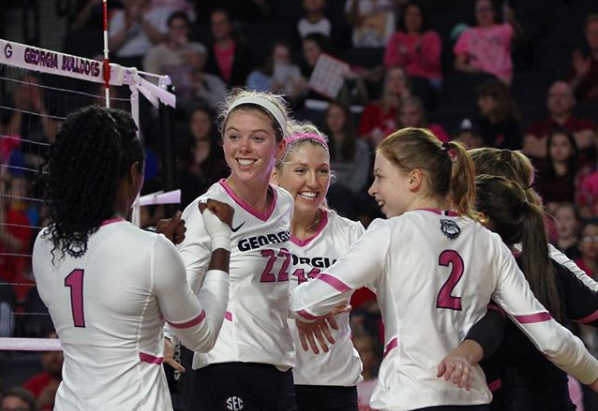 Georgia volleyball (12-7, 3-5) travels to Columbia, South Carolina for a rematch with the South Carolina Gamecocks (14-4, 5-3) Sunday. First serve from the Carolina Volleyball Center will be at 3 p.m.

• Sunday’s match will air nationally on the SEC Network. Sam Ravech will provide play-by-play while Jennifer Hoffman will provide analysis.

• The match will be streamed live via WatchESPN and the ESPN app.

• Live stats will be available. Links can be found on the volleyball schedule on GeorgiaDogs.com.

• Georgia held a 2-0 lead in the Sept. 30 match, but South Carolina posted a comeback to force a fifth set and defeat the Bulldogs in five sets in Athens.

A Look at What’s Ahead

Georgia hosts its first back-to-back matches at Stegeman Coliseum since the beginning of the season Oct. 26 and 28. #16 Kentucky and Tennessee come to Athens for a full weekend of volleyball. It’s back on the road for three-straight to open the month of November beginning at Alabama.

Recap from the Last Meeting

Despite taking a 2-0 lead in the match, Georgia volleyball fell in five sets to South Carolina at Stegeman Coliseum Sept. 30. The fifth set went down to the wire with the Gamecocks winning 15-13. The Bulldog offense was led by an 18-kill performance from Rachel Ritchie followed closely by 17 kills from T’ara Ceasar. Ceasar also had 14 digs for her fifth double-double. Defensively, Kendall Glover picked up 15 digs while Bass had six blocks. At the service line, Georgia had six aces, three from Ceasar.

T’ara Ceasar recorded a career-high 28 kills in Georgia’s five-set loss to Texas A&M Sunday at Stegeman Coliseum (26-20, 20-25, 22-25, 25-23, 12-15). In eight SEC matches this season, Georgia has gone to five sets in six of said matches. Offensively, Ceasar recorded her seventh 20-kill match and ninth double-double with 28 kills and 11 digs. Ceasar’s kill mark is the most by a Bulldog since Maria Taylor had 32 at Duke on Sept. 6, 2008. Rachel Ritchie tipped the double-digit kill mark with 12. Meghan Donovan set a new career high with five services aces. She also earned a double-double, her ninth, with 52 assists and 10 digs. As a team, Georgia had 12 aces on the day, the most since recording 15 against North Carolina on Sept. 9. Defensively, had five players with double-digit digs led by 18 from Kendall Glover and a career-high 12 by Carolina Ostman.

Georgia’s 14.8 digs per set ranks third in the SEC. Libero Kendall Glover’s 4.2 average comes in at fourth in the league. Her 332 total digs is the most in the league. Georgia has had four or more tip the double-digit mark six times, five of which have come in eight SEC matches. Twice (at Auburn, vs. Texas A&M), Georgia has had five reach the mark.

Six of Georgia’s eight SEC matches have gone to five sets this season. In all, the Bulldogs have played nine five-set matches, going 3-6 in those contests. Six of Georgia’s seven losses on the season have come in five sets. In four of the five fifth-set losses, Georgia has lost by three points or less.

Sophomore T’ara Ceasar hasn’t skipped a beat after a breakout freshman campaign. The sophomore ranks 26th nationally, fifth in the league, with 4.31 kills per set. Her 336 total kills ranks second in the SEC and 14th in the country. She’s scoring 4.79 points per sent, a figure that ranks fifth in the SEC and 25th in NCAA.

Junior setter Meghan Donovan’s 11.27 assists per set ranks 20th in the country while leading the SEC in the category. In the match at Ole Miss on Sept. 28, Donovan notched her 3,000th-career assist. She became only the seventh Bulldog setter to tip the 3,000-assist mark in her career. Her 10.64 assists/set in her career ranks 12th among active Division I setters. She recorded a new career-best 62 assists at Auburn on Oct. 3. As a team, Georgia ranks second in the conference with 12.8 assists per set.

The Steg is Rockin’

Georgia ranks sixth in the SEC with an average attendance of 1,340 per match. That figure also cracks the top 30 in the country for average attendance. So far this season, 8,038 have flocked to Stegeman Coliseum to cheer on Georgia volleyball.

Georgia ranks 26th in the country, third in the SEC, with 1.63 aces per set. The Bulldogs have picked up where they left off a season ago at the service line as they averaged 1.57 aces per set to lead the league. Against Texas Tech, Kendall Glover tied a Georgia rally scoring record with seven aces in a three-set match.