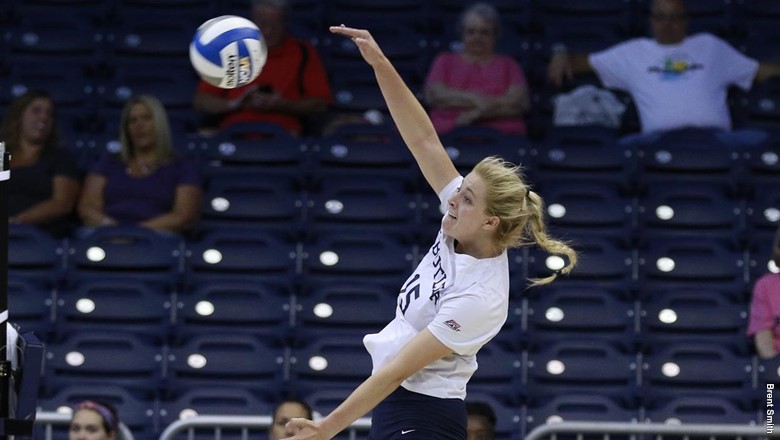 MILWAUKEE, Wisc. – Butler, needing a signature win to boost their RPI (currently: 70) off of the NCAA tournament bubble, got their victory in a five-set thriller against Marquette (current RPI: 37) in Milwaukee Saturday night. The set scores were 20-25, 25-18, 28-30, 25-17, 15-11. The loss dropped Marquette out of first place in the Big East, while Butler kept pace with the four teams in front of them, currently fifth in the conference and three wins clear of Providence in 6th place.

The Bulldogs nearly got a second triple-double performance on the season from setter Makayla Ferguson with 54 assists, 17 digs and 9 kills. She also contributed 3 blocks and an ace to complete an impressive stat line. Middle blocker Bri Lilly had team-highs 17 kills and 5 blocks. Multiple Bulldogs earned double-double marks, including outside hitter Whitney Beck (16 kills, 12 digs), right side Natalie Ravanell (12 kills, 12 digs) and outside hitter Anna Logan (11 kills, 16 digs). Libero Taylor Takeda almost had a double-double of her own with a match-high 20 digs and 8 assists.

Marquette received a career night from Allie Barber, who had a match- and career-high 27 kills (hitting .318) with 3 blocks. The only other double-double on Marquette was Hope Werch with 10 kills and 12 digs. Freshman libero Martha Konovodoff finished with 16 digs, while Anna Haak led Marquette with 17 digs to go along with her 7 kills.

Butler outpaced Marquette in three statistical categories, despite their size disadvantage. The Bulldogs led in kills (74-65), assists (69-65) and digs (81-69), while the two teams tied in blocks (9 each) and aces (5 each).

MILWAUKEE – The Butler volleyball team recorded a big road win at Marquette on Saturday night by defeating the Golden Eagles 3-2 (20-25, 25-18, 28-30, 25-17, 15-11). Butler has now won three-straight on the road as they prepare for five-straight upcoming home games at Hinkle Fieldhouse.

Four different BU student-athletes notched a double-double at the Al McGuire Center allowing BU to come out victorious. Senior setter Makayla Ferguson narrowly missed her second triple-double of the season with 54 assists, 17 digs and nine kills. She added three blocks and a service ace to her stat line in the win.

Bri Lilly was also a dual threat in the starting lineup. The middle blocker posted 17 kills off just 25 attempts while leading the team with five blocks. She posted a team-best .640 attack percentage while adding four digs and a pair of assists.

Outside hitters Whitney Beck and Anna Logan were heavily involved in the game plan Saturday night. Beck delivered 16 kills and 12 digs at Marquette while Logan was in the box score with 11 kills and 16 digs. The third BU outside hitter to record a double-double was freshman Natalie Ravenell who ended the night with 12 kills and 12 digs.

Libero Taylor Takeda would lead the team with 20 digs. She was one of five players to pick up a service ace and also chipped in with eight assists. Yet another Bulldog to impact the decision was sophomore Brooke Gregory. She tallied eight kills and four blocks.

The match got underway with Marquette winning the opening set 25-20. The Golden Eagles jumped out to a 7-2 lead and would never trail even though Butler climbed back within one at 9-8. The early deficit was just too much to overcome as kills from Allie Barber and Hope Werch would end the opener.

Set two started in a similar fashion with Marquette owning a 6-2 advantage early. Butler came back to tie set two at 8-8 and would move ahead 15-10 at the midway point. The five-point cushion would shrink to just two points at 20-18, but kills from Beck, Ferguson, Lilly and Logan would allow Butler to even the match at 1-1.

Set three was an absolute marathon that took 30 points to decide a winner. A costly service error from Butler would make the score 29-28 and a BU attack error would give Marquette the 2-1 lead.

One of the biggest moments in the match was the fourth set. Butler played great with their backs against the wall to post a 25-17 win. BU broke a 3-3 tie early to enjoy at 19-10 lead. The fourth was never in question as Logan came up with the game-winner off the feed from Ferguson.

Butler rolled that momentum into the fifth set by grabbing a 4-0 lead. The ‘Dawgs never trailed in the fifth to take the edge of the gutsy road win.

Marquette took the first frame, 25-20, but the Bulldogs answered in the second winning 25-18 to even the match.

The third frame became a battle down the stretch as MU needed extra points in its 30-28 victory. Rosenthal connected on a kill in the back corner of the floor to give the Golden Eagles set point, 24-21, but Butler stormed back with a 4-0 run to take a 25-24 lead. MU kept staving off the Bulldogs each time Butler took set point, until MU used two Bulldogs errors to its advantage for the win.

After Butler claimed the fourth set to push the decisive fifth frame, the Bulldogs opened the final set with a 4-0 lead and was the first to reach eight points with MU trailing 8-5 as the teams switched sides of the court. Werch connected on a kill to pull within two points, 8-6, but the Golden Eagles would not get that close again, falling 15-11 in the final frame.