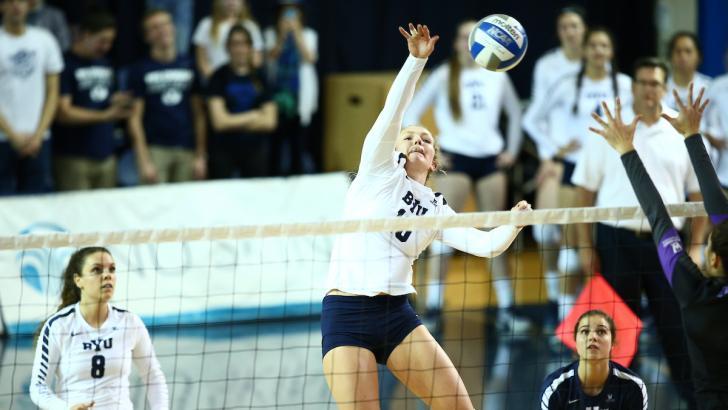 The Portland Pilots have had a big run against top-25 opponents this season, including a win earlier this season against BYU and one on Thursday against #7 San Diego (for the first time since 1987).

Their momentum ran out on senior day in Provo, where the Cougars halted Pilot momentum with a 3-0 sweep that, aside from a second set that went deep into extra points, was rather lopsided.

BYU had 4 players record double-digit kills, including 14 by Whitney Howard on just 20 swings for a .600 hitting percentage. Overall, BYU hit .307 as compared to Portland’s .125.

Hannah Troutman had a double-double for Portland with 14 kills and 12 digs. She’s had double-digit kills in all but 2 of Portland’s games this year, and Saturday’s matchup with BYU was her 16th double-double of the season.

“I thought our team played well as a whole, but I thought our seniors played exceptionally well,” BYU head coach Heather Olmstead said. “Whitney (Young Howard), Amy (Boswell), Hannah (Robison) and Makenna (Santiago) all brought it tonight and it was fun to go out and play for them on Senior Day.”

Howard led the team in kills with 14 and Lacy Haddock added a total of 12. Lyndie Haddock recorded 42 assists and 15 digs for a double-double. Amy Boswell led with six total blocks and 10 kills. Mary Lake added to the total number of digs with 23 and tallied five assists.

BYU (24-3, 13-2 West Coast Conference) kicked off the first set with a kill from Boswell. Portland (15-12, 8-7 WCC) took the next point, but the Cougars took the lead at 6-3 with three-consecutive kills from Howard. With two kills from Lacy Haddock and a few errors from Portland, BYU rallied to an 11-point lead over the Pilots, 12-3. With a Boswell block and her second kill of the game, the Cougars went up 21-5. As McKenna Miller took her second kill of the game at 24-7, Portland went on a three-point rally to try and close the gap before set point, down 24-10. Miller’s set-ending kill brought the Cougars their first set win of the match at 25-10.

At the start of the second set Portland came out strong, taking an early lead over the Cougars 4-2. BYU gained momentum after three kills from Veronica Jones-Perry and two kills from Lacy Haddock, bringing the Cougars to a three-point lead over the Pilots at 8-5. After three errors from the Cougars, Portland fought back, tightening the score, down 11-10. A long rally between the two teams ended with a kill from Portland’s Hannah Troutman, taking them 12-11 over BYU. Lake had two aggressive defensive saves for BYU as the teams battled back-and-forth with points until the Pilots took a two-point advantage over BYU, 16-14. With a Howard kill and Boswell block, the Cougars tied the set at 16-16. The Pilots maintained their lead, but BYU continued to battle back with a total of five blocks between Miller, Howard and Jones-Perry, trailing 23-22. As the Pilots climbed their way to set point, the Cougars trailed by one, but Boswell tied the score with her sixth kill of the game at 24-all. The teams continued to trade points until a kill from Howard brought BYU up 31-30 over the Pilots. Boswell ended the long set at 32-30 with a kill.

Portland began the third set of the match up taking a quick two-point lead at 3-1. The Pilots stretched their lead after two attack errors from BYU to go up 5-2. Howard tied up the set, passing her previous career high in kills, at 5-5. Strong offensive attacks from Miller, Haddock and Jones-Perry carried the lead over the Pilots, 9-7. Lacy Haddock, Miller and Boswell then traded kills for the Cougars, increasing their advantage to nine at 18-9. A service ace from Lyndie Haddock inched the Cougars closer to match point with an 11-point lead at 22-11. Portland attacked back to try and close the gap, but Jones-Perry finished off the third and final set of the match with a kill, giving BYU a 25-15 set three win.

The Cougars hit the road next, facing San Francisco on Nov. 17, at 7 p.m. PST. The match will be streamed live on TheW.tv. Links to live stats and a video feed can be found on the BYU women’s volleyball schedule page.

PROVO, Utah. — BYU topped the Portland Pilots in three sets in their last West Coast Conference road match of the season, Saturday afternoon in the Smith Fieldhouse. The Cougars won the three sets with scores of 25-10, 32-30, and 25-15.

BYU (24-3, 13-2 WCC) opened up the first set with an impressive nine-point run, followed by a seven-point run to take a huge lead. Moments later Pukis recorded her second kill of the set to prompt a short point run for Portland, consisting of kills from Hannah Troutman, Sarah Savoca, and Katie Sullivan, along with an ace from Emma Scanlan. Despite the run, BYU continued to surge through the end of the set to win 25-10.

The Pilots (15-12, 8-7 WCC) took an early 4-2 lead in the second set before, the Cougars tried to pull away at 8-5. Portland then tied up the set with kills from Markwith and Pukis along with a block from Markwith and Savoca. Troutman then register three kills to increase Portland’s lead by three. The Cougars fought to climb back within one, but Pukis extended Portland’s lead back to two with a kill. BYU proceeded to spark a late comeback, to tie up the set, prompting Markwith to respond with three crucial kills bring the set to extra points, but BYU continued to answer, battling the Pilots and completing their comeback to end the set 32-30.

The Cougars took a three-point lead in the third set and continued to extend that lead with a seven-point run. Sullivan attempted to spark a run with back-to-back kills, but BYU’s Veronica Jones-Perry and McKenna Miller finished up the set with kills to make it 25-15.

Troutman had a double-double on the match with 14 kills and 12 digs. Monica Gajda led in digs with 17 and Cali Thompson had 34 assists.

The Pilots will return home for their last three matches of conference next weekend against Saint Mary’s, Pacific, and Gonzaga.