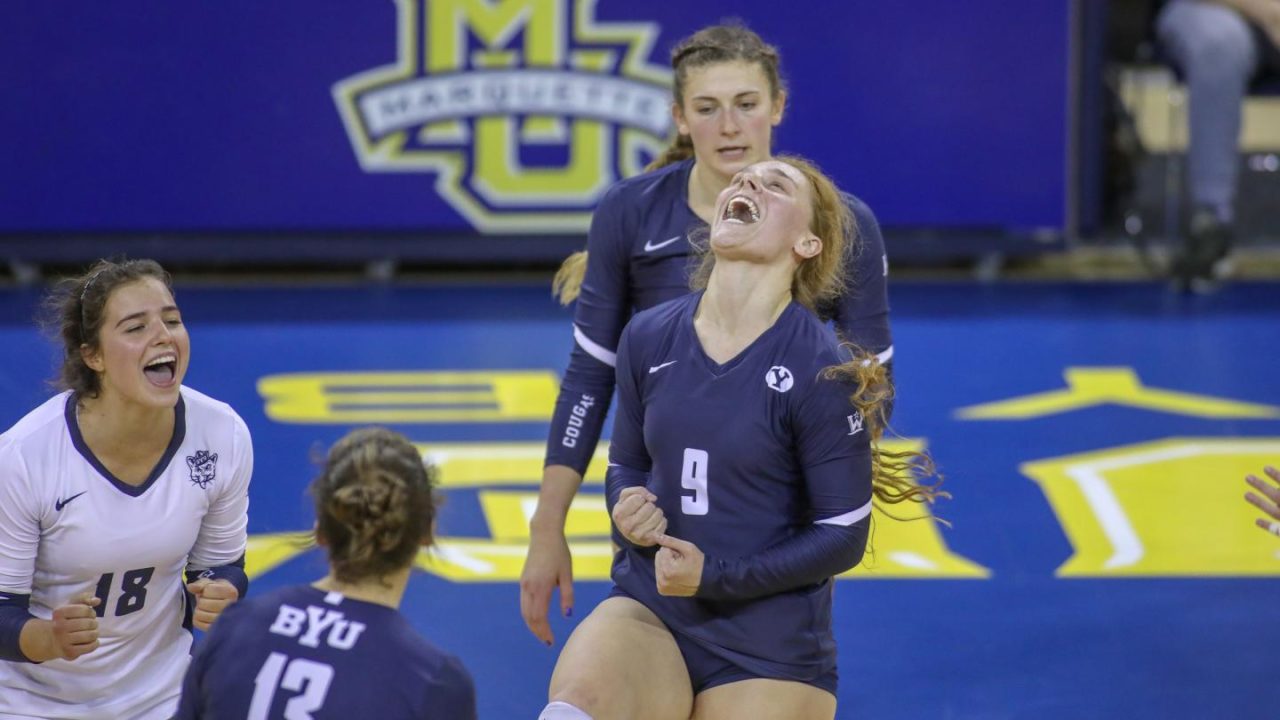 Top-ranked BYU remained undefeated on the season at 8-0, with a 3-0 Marquette Invitational mark this weekend. Meanwhile, 5th-ranked USC salvaged its weekend, outlasting Syracuse in a 5-set battle to go 1-2. Current Photo via BYU Athletics

Top-ranked BYU remained undefeated on the season at 8-0, with a 3-0 Marquette Invitational mark this weekend. Meanwhile, 5th-ranked USC salvaged its weekend, outlasting Syracuse in a 5-set battle to go 1-2.

After falling behind 2-0 to Syracuse, 5th-ranked USC rallied back to register a 5-set victory to recover from its Friday losses to top-ranked BYU and 22nd-ranked Marquette. The Trojans finished the Marquette Invitational with a 1-2 mark.

The opening set contained 6 ties, however, USC only led once, 18-17, as Syracuse held off the Trojans to register the advantage with a 25-22 win.

Syracuse continued to control the match, beginning the second set with a 6-1 stretch. USC brought it back within one, but the Orange responded with 5-straight scores to provide a cushion. The Trojans came back to pull ahead 23-22 late, however, their efforts would not be enough as a 5-2 stretch gave the Orange the 27-25 edge.

The Trojans came out firing in the third set, notching a 6-1 start. USC never surrendered its lead en route to a dominant 25-14 win.

In the fifth set, both teams fought back and forth through 5 tie scores. With the score knotted at 10, USC notched 5 of the final 8 points to come out on top, 15-13, and register the 5-set victory.

Top-ranked BYU halted a 4-match win streak, defeating 22nd-ranked Marquette in 4 sets Saturday night. The Cougars have yet to lose to the Golden Eagles, owning a 3-0 advantage in the all-time series following the win.

BYU went undefeated on the weekend, notching sweeps against 5th-ranked USC and Syracuse on Friday inside Al McGuire Center in Milwaukee, Wis. The Golden Eagles wrap up the tournament against Syracuse on Sunday.

Marquette led by 6 midway through the second set, 15-9, but BYU refused to go away. The Cougars worked their way into a 22-22 tie, before senior Roni Jones-Perry could solidify the 25-22 comeback win with two kills and a service ace.

The Cougars maintained the momentum in the fourth set, rattling off 4-straight points to open the frame. BYU never faltered from there, registering a dominant 25-14 win to secure the team result, 3-1.