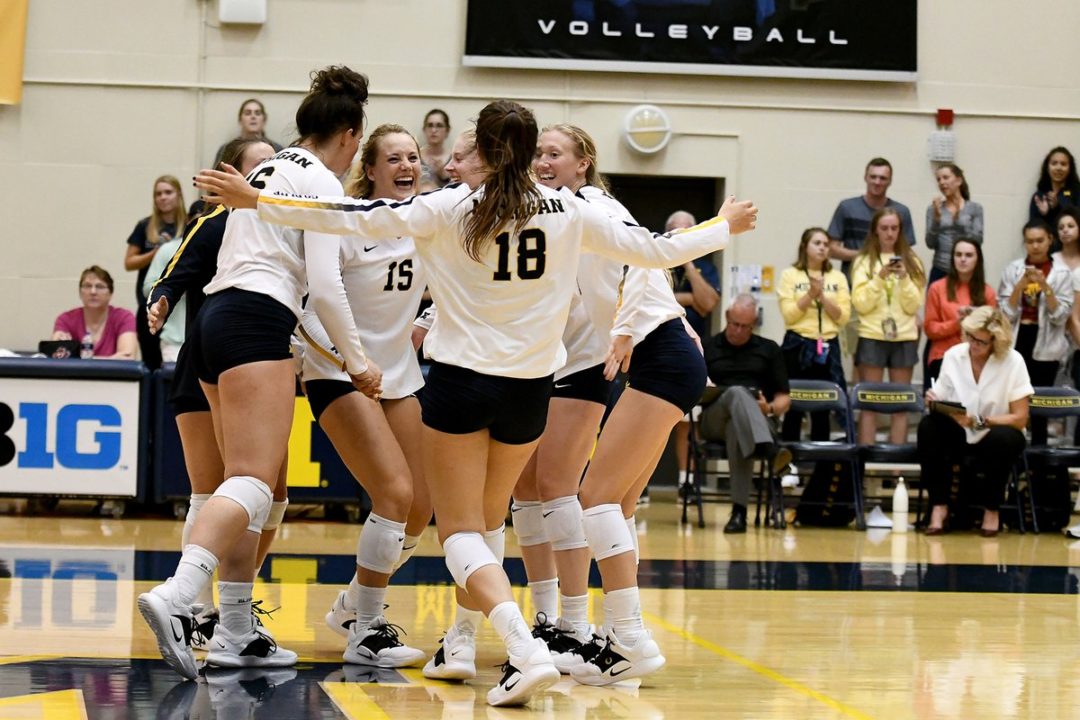 The No. 19 Michigan Wolverines moved to 9-0 on the season upping their winning streak to 27 straight sets, this time topping vote getter Colorado State (6-3) on Saturday to claim the Michigan Challenge title.  Current Photo via Michigan Athletics

The No. 19 Michigan Wolverines moved to 9-0 on the season upping their winning streak to 27 straight sets, this time topping vote getter Colorado State (6-3) on Saturday to claim the Michigan Challenge title.

LSU topped Oakland in a sweep in other action in Ann Arbor on Saturday.

Stat Leaders: It was a one-woman show for Michigan as rookie outside Paige Jones piled up 18 kills and seven aces, both career highs, while hitting at a match-best .500 clip (18-4-28) in the victory. Carly Skjodt added seven kills and six digs, while Cori Crocker managed six putaways and a team-best four blocks. Jenna Lerg was tops on defense with 18 digs.

It Was Over When: After holding off a late CSU charge in Set 2, Michigan built a 9-4 lead in Set 3 and again held on for the victory to clinch the sweep. Four different players tallied kills in the opening stages and the Wolverines had help from three Ram errors. Michigan upped its advantage to six at 14-8, before Colorado State started chipping away with six of the next nine points, narrowing the gap to three at 17-14. Two Hillyer blocks aided the comeback effort. A 6-2 run, including two Jones kills and a kill and a block by Crocker, put the Wolverines comfortably ahead at 23-16. Sydney Wetterstrom and Jones sealed the win at 25-18.

Stat Leaders: LSU’s Taylor Bannister was the star of the match, posting 18 kills, more than double any other player. Bannister also added five digs and three blocks, while hitting .387. Whitney Foreman followed with eight kills and three blocks for the Tigers, while Jacqui Armer chipped in five putaways and four stuffs.

Jamie Walling and Abby Neidinger were tops among the Grizzlies offensively with eight kills apiece, although neither hitting better than .167 in the match. Walling did add six blocks and three digs, while Jordan Lentz put up three stuffs to go with 23 assists, four digs and three kills.

It Was Over When: Oakland boasted an 8-6 lead in Set 3, but LSU rallied to go up 10-9 with help from two blocks. The teams traded points over the next 24 serves, leading to a 22-21 advantage for the Grizzlies. LSU called timeout and scored four of the next five to close out the sweep. Foreman, Rodriquez and Armer notched kills to make it 24-22. After an Oakland timeout and Tiger hitting error, Rodriguez sealed the deal.