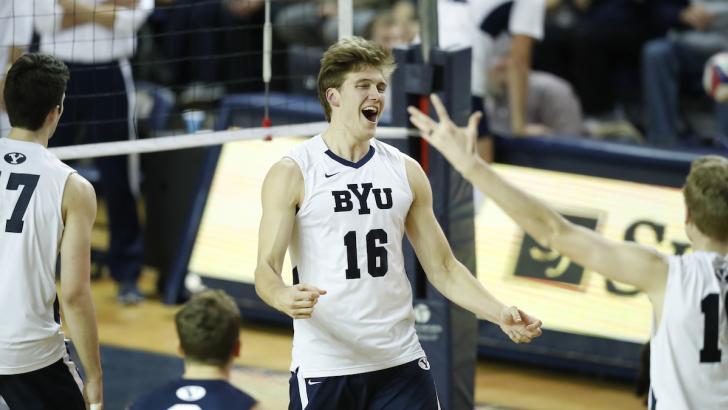 BYU already knows they’re losing All-American opposite Ben Patch after Saturday’s NCAA Championship game, as he will turn pro with one season of eligibility remaining.

There’s a chance that the Cougars will lose two opposites, however, as revealed during ESPN2’s telecast of that championship.

6’10” outside Tim Dobbert is considering turning pro as well, leaving 1 year of eligibility on the table. Dobbert has already graduated with a degree in engineering.

The German native  emerged as a star as a senior while Patch battled a groin injury all year long. Not including Saturday’s championship game, in which Dobbert started over Patch, he has recorded career-highs in points (220< blocks (52), aces (14), and kills (178). He started 18 matches, after just 4 starts as a redshirt sophomore in 2016.

Dobbert, unlike most of his teammates, is not a member of The Church of Jesus Christ of Latter-day Saints, meaning that unlike most of his teammates, he did not take off 2 years of his college career to complete a religious mission. He did, however, take a medical redshirt in 2015, his true sophomore season, after starting in just 6 matches, and so has still been at BYU for 4 years.

With no professional indoor league in the mainland United States (Puerto Rico has one), both Patch and Dobbert, if he decides to turn pro, are likely headed to Europe or Asia to continue their careers. For Dobbert, that would be an easy transition closer to home – he’s a native of Germany. Italian scouts are believed to be in attendance at the national championship game to watch Patch, at least, play.