Saad finishied hs GCU career ranked third in the program's in kills with 925 and fifth in aces with 68. Current Photo via 1liga.pls.pl 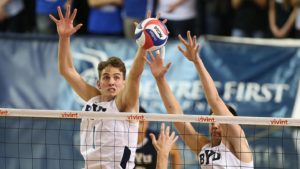 Polish club KPS Siedlce has announced in its official Facebook page that it has signed Shalev Saad to its roster. The 26-year-old 6’5″ outside hitter, a Israeli native, is signing his first pro contract after graduating from Grand Canyon University. He is also a member of the Israeli national team and played beach volleyball during his youth, even going so far as participating at the European Championships. Here are his first words as a member of his new team:

“It’s a challenge! For me it’s a new country and I get to learn  something new all the time. It’s also a new language. All the time I look around myself so that someone can translate to me, for example, what the trainer said. I love the city in which I live now and the team in which I play. Really, everything is professionally organized. There is a big difference between what it looks like in Israel. I am very happy that I have the opportunity to play in Poland. I am grateful to my manager, as well as to coach Grzegorz Rysi and Adam Malik for helping me find a club here.

It was a very difficult summer for me. I finished college in the United States. I wanted to take another step in a professional league. In addition, in Europe we can talk about a really high level of training, thanks to great trainers. I did not play too much in the national team, but I got my chances and my skills were noticed. I was looking for a club where I could develop, play at a high level, and above all I will get a chance to play. I think that the Polish league is the best choice .

I was 22 when I moved to the United States to gain new experience. The game there was something completely new to me. It was a different volleyball than the one that I knew so far. It’s the same in Poland. For me it is also a new experience. Many things are new and different to me. I am very happy that I could have experienced something like that in the USA. As you said, it was great experience and challenge. I did what I love. It’s my job, but it’s very nice. I am happy that I can experience all this, meet new people and new countries.”