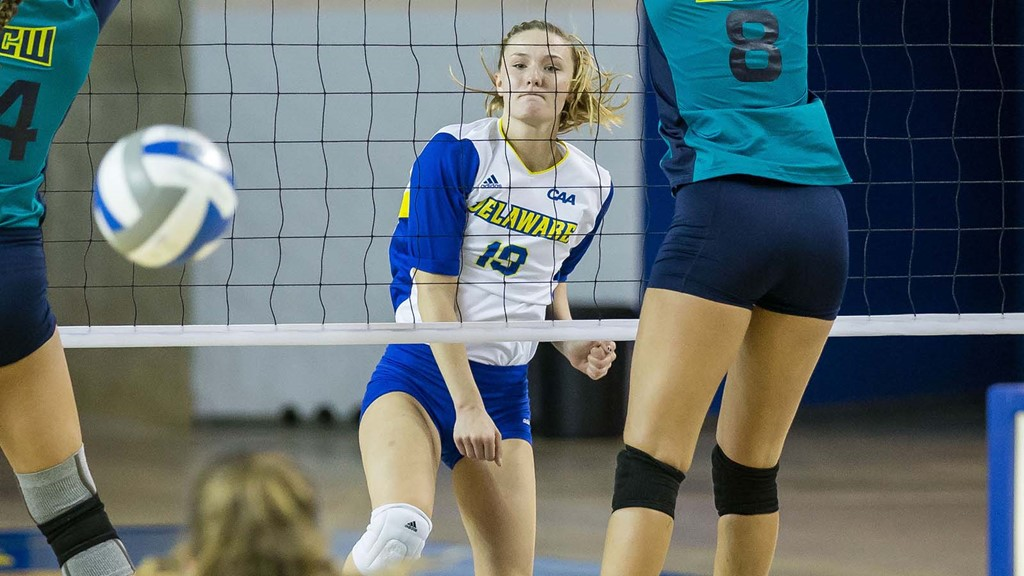 Delaware’s Maria Bellinger earned her first CAA Offensive Player of the Week honor of 2018, while Sarah Driscoll of James Madison and McKala Rhodes of the College of Charleston shared defensive honors. Towson’s Emily Jarome was named CAA Rookie of the Week. Current Photo via Delaware Athletics

Maria Bellinger, Delaware
Junior | Outside Hitter | Paramus, N.J./Paramus
Bellinger amassed 33 kills in the Blue Hens’ 3-2 win over Northeastern on Oct. 12. Her kill total was just one off the program record which she set at 34 against Elon on Oct. 7. She reached the 1,000-kill mark against the Huskies and is just the 19th Blue Hen to hit that milestone. She followed up that performance with 20 kills against Hofstra on Oct. 14 to give her 53 kills on the week at a clip of 5.88 kills per set. Bellinger leads the CAA with 324 kills and 4.26 kills per set and is currently the only player with 300+ kills in the league.

CO-DEFENSIVE PLAYER OF THE WEEK

Sarah Driscoll, James Madison
Junior | Defensive Specialist/Libero | Cincinnati, Ohio/Lakota East
Driscoll’s defensive efforts led James Madison to a 3-0 week in CAA play to move the Dukes to 8-0 on the season against league opponents. Driscoll led the Dukes with 56 digs on the week and led each match. Driscoll posted 14 digs against both William & Mary and UNCW, while collecting 28 digs against Charleston. Driscoll sits fourth in the CAA in digs with 351 and 4.88 digs per set.

After a week of big performances, Sarah Driscoll has picked up a @CAASports Defensive Player of the Week honor!#GoDukes https://t.co/Wxnc69KHHX

CO-DEFENSIVE PLAYER OF THE WEEK

McKala Rhodes, Charleston
Senior | Libero | Charleston, S.C./First Baptist
Rhodes turned in a pair of stellar performances over the weekend, leading the Cougars defensively to a 1-1 mark on the road. She totaled 39 digs for an average of 5.57 digs per set and added three service aces and a .966 receive percentage. Rhodes made history on Oct. 14 in the Cougars’ sweep of Towson. She collected a season- and match-high 26 digs, which ranks most by a Cougar in a three-set match during the rally scoring era.

Congratulations to senior McKala Rhodes, YOUR @CAASports Co-Defensive Player of the Week!

Emily Jarome, Towson
Freshman | Outside Hitter | Wilmington, Del./Padua Academy
Jarome led Towson in the Tigers’ five-set win against UNCW on Oct. 12, extending Towson’s win streak over the Seahawks to six. She pelted the Seahawks with a team-high 17 kills and a .297 hitting percentage. She added 10 digs to account for her first career double-double. Jarome finished the week with 24 kills and added three assists and two block assists.

Back ✌️ Back weeks with @CAASports Weekly Award Winners!

Congrats to @emjarome42 on her Rookie of the Week nod!