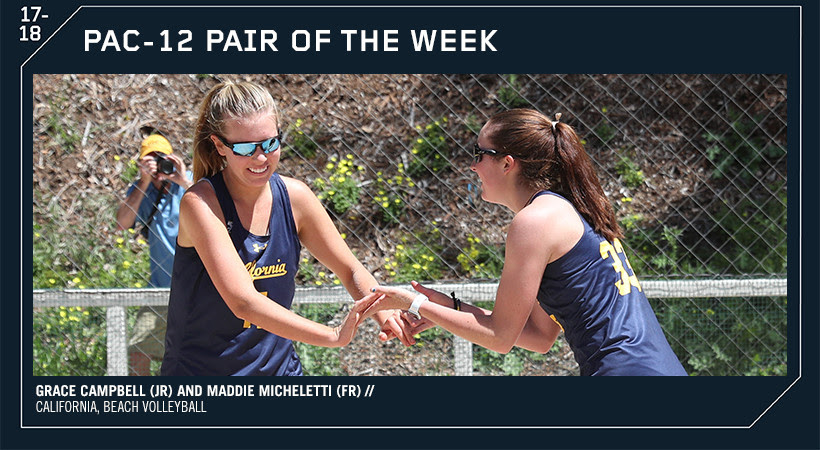 Junior Grace Campbell and freshman Maddie Micheletti made history on Tuesday as the duo earned the University of California beach volleyball program's first ever Pac-12 Beach Pair of the Week nod. Current Photo via Pac-12 Conference

Junior Grace Campbell and freshman Maddie Micheletti made history on Tuesday as the duo earned the University of California beach volleyball program’s first ever Pac-12 Beach Pair of the Week nod.

The duo, which was key in the Bears’ 3-2 wins over No. 20 Stanford and No. 12 Saint Mary’s last week, moved to 24-1 on the season, including 13 straight victories. The pair, which is ranked second among all Court 5 pairs nationally by collegebeachvb.com, dropped just five sets all season.

Campbell, a Manhattan Beach, California, native played on Courts 2 and 3 as a sophomore, registering two wins against ranked opponents and going on to earn Pac-12 All-Academic Honorable Mention accolades. As a rookie in 2016, she went 19-9 on Court 3 alongside Olivia Rodberg, knocking off six ranked opponents.

Micheletti, also a Manhattan Beach native, comes to Berkeley from Mira Costa High School, where she helped the school to four straight Pacific Interscholarstic League championships without losing a match and also earned the school its first IVBL state title.