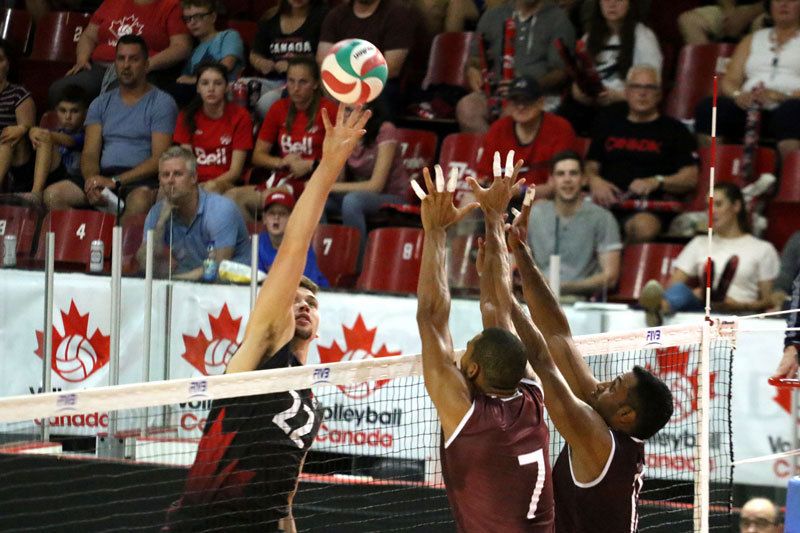 After back to back silver medals at the Pan Am Cup, Argentina began its push for more with an easy sweep of Puerto Rico. Meanwhile, home-standing Canada bested Venezuela in four sets to wrap up Day 1 action in Pool B. Current Photo via NORCECA

After back to back silver medals at the Pan Am Cup, Argentina began its push for more with an easy sweep of Puerto Rico. Meanwhile, home-standing Canada bested Venezuela in four sets to wrap up Day 1 action in Pool B.

Tough serving, to the tune of nine aces, lifted Argentina to a sweep of Puerto Rico to kick off Pool B action at the Pan Am Cup.

In addition to crushing Puerto Rico 9-0 from the service line, the Argentines edged their foes 34-31 in kills and 7-6 in blocks. The victors also had help from 25 Puerto Rican miscues, while committing just 14 of their own.

“In the beginning we didn’t have a good rhythm, but after four or five points we started to play in a good way,” Argentine coach Julio Velasco said. “The serve, block and defense system worked very well and gave a lot of problems to Puerto Rico, especially in the service, and our sideout worked especially in the second and third set. To be the first match and we haven’t played for a long time, it was ok.”

“This is our first match of the season, and I think they performed well,” Puerto Rican coach Ramon Hernandez said. “Obviously, we played against one of the best teams in the tournament and we knew it was going to be a really difficult match, but Puerto Rico played well.”

“Obviously the first match of the tournament is always pretty difficult, so I’m pretty happy with the result here,” Canadian captain Max Burt said. “It’s also our first game as a team this season, and that’s a pretty good Venezuelan team.  It’s a very positive start for our group and some of our guys haven’t played at this level before, so we’re satisfied with the result tonight.”

“Considering the problems we face at home and how we got here, our team gave it all and you see on the court,” Venezuelan coach Ronald Sarty said. “Of course, we must improve our reception, a key element in the first part of the game and to keep the consistency in our play. We have to be patient in this new Olympic cycle and work individually with these players to improve as a team overall. We aim to advance to the next round here.”