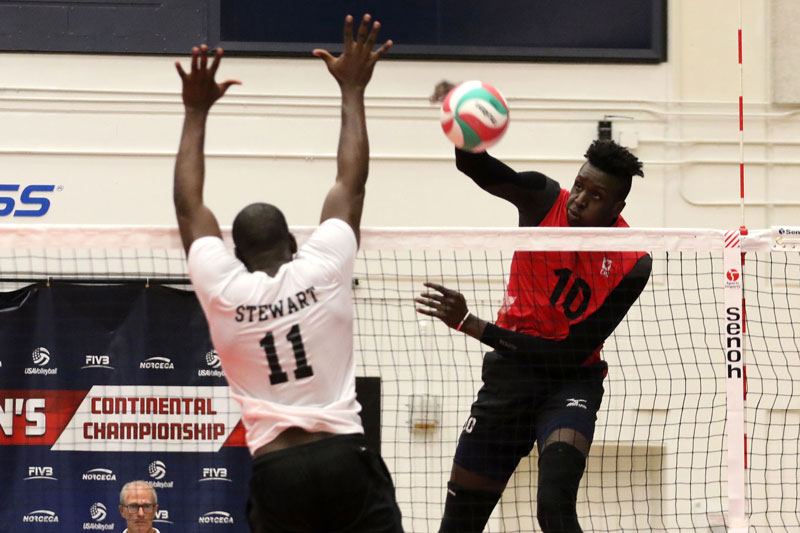 The final day of pool play has concluded at the 2017 NORCECA Men's World Qualifier. Current Photo via NORCECA

The final day of pool play has concluded at the 2017 NORCECA Men’s World Qualifier. Canada and Mexico finished their play with a high enough point ratio to advance directly to the semifinals on Saturday evening while Team USA will have to fight through Costa Rica on Friday during the quarterfinal stage.

The top three teams in the tournament will earn their bids to the 2018 World Championships.

Despite Team USA winning Group A, they will have to battle it out against Costa Rica in the quarterfinals to forge their way into the semifinals. The Americans had the lowest point differential out of the three pools which forced them into quarterfinal play. The winner of Team USA and Costa Rica will face off against Canada in the semifinals.

Thomas Jaeschke led all scorers with 14 points on 10 kills and four blocks while Taylor Sander added another 12 with seven kills and five aces. Mitch Stahl made his debut with the Men’s National Team and contributed 10 points on five kills, four blocks and one ace. For the Dominican Republic, Wilfrido Hernandez put down seven points.

Canada concluded pool play with a 2-0 record, with a point ratio high enough to send them straight to the semifinals. The Canadians had no troubles fighting their way past Trinidad and Tobago in straight sets to complete the feat.

Nick Hoag led the Canadian front with 16 points on 11 kills, four aces and one block while Sharone Vernon-Evans added another 15 points including a match-best four blocks. For Trinidad and Tobago, Ryan Stewart led the way with nine points.

Martinique claimed their first victory of the competition over St. Vincent in straight sets. The two teams will now move onto the classification rounds of the competition, where they will face off against each other once again.

In a battle of unbeaten teams in the tournament, Mexico flew through Costa Rica in three sets to claim an undefeated record. The win set the Mexican crew straight into the semifinal round on Saturday after winning Pool C and a high enough points ratio to bypass the quarterfinals.

The team was led by Jorge Barajas with 14 points including six aces and three blocks. Daniel Vargas added another 14 points in the win. For Costa Rica, Alberto Blanco led the front with eight points.