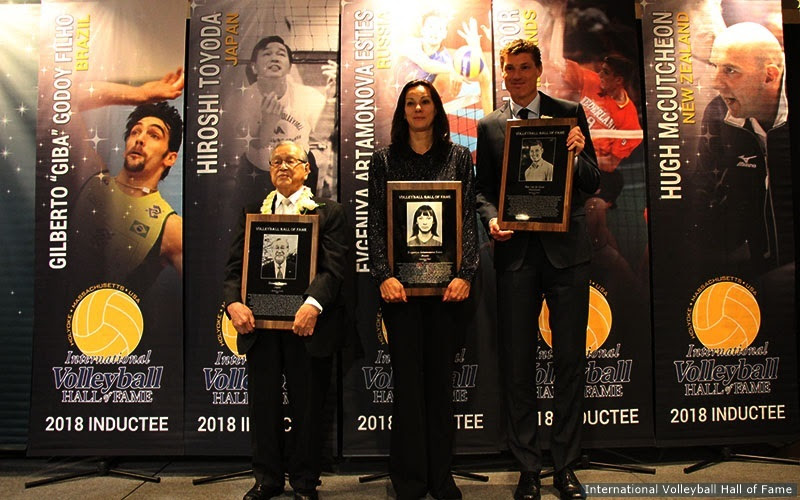 HOLYOKE, Mass. – Five storied members of the volleyball world were enshrined into the International Volleyball Hall of Fame (IVHF) in Holyoke, Massachusetts, USA – the birthplace of the sport.

In his welcome remarks, IVHF President Steve Bishop noted the impact the Class of 2018 made on the sport throughout their lengthy careers.  “We are looking forward to adding this class tonight and welcoming them into this family,” said Bishop.

“The five legends enshrined tonight represent a sampling of the absolute best ever involved with our sport as players, coaches and leaders,” International Volleyball Hall of Fame Executive Director George Mulry said. “These five inductees have made unique lasting marks on the sport and we are honored to have them memorialized here in Holyoke.”

The induction class is elected via a vote of current Hall of Fame inductees along with a new online fan vote added in 2018. A short biographical sketch on each inductee can be found below with an excerpt from their acceptance speech. For the tenth year, the Induction Ceremony was broadcast live online at volleyhall.org.

McCutcheon, a native of New Zealand, was inducted into the Hall as a coach. He started playing in his home country in 1985 and ascended quickly into the international ranks with the junior and senior national teams. He received the opportunity to play in the United States at Brigham Young University, winning two national titles with the Cougars before starting his coaching career. McCutcheon rose through the USA Volleyball ranks, ultimately leading the U.S. Olympic Men’s Volleyball Team to the 2008 Olympic gold medal and then the 2012 Olympic silver medal with the USA Women’s team.

Introduced by Olympian Kevin Barnett, who described McCutcheon as “humble greatness,” McCutcheon was unable to attend the ceremony in person due to coaching his current team, the University of Minnesota women’s program. He sent a heartfelt acceptance video in his place.

“The fact that I’m standing in front of you tonight, it’s certainly all very humbling and a little bit surreal, so thank you,” stated McCutcheon. “To my fellow inductees, my sincere congratulations. I’m so humble to be inducted with this group of volleyball legends, you’re all amazing. I’ve worked with a lot of really great people, you can’t do these things alone. Thank you for the countless hours you committed to making our teams the best they could be. Thank you again for this honor, it means so much.”

Known the world over as Giba, he was inducted into the Hall as a male indoor player after starring for Brazil during its golden age on the court. He became a leader during his career that spanned from 1995 to 2014 and included four Olympic Games with one gold and two silvers. With his leadership, Brazil won gold at the FIVB World Championship in three consecutive editions in 2002, 2006 and 2010. From 1999 to 2011, Giba and the Brazilians had an incredible run in the FIVB World League with 11 medals in a 12-year span, including eight golds, two silvers and two bronzes. After retiring from the sport, Giba was selected as the president of the first FIVB Athletes Commission, which serves as a link between the players and the FIVB leadership and governance. He also works with children fighting leukemia, much as he did as a youth.

2014 Inductee Joop Alberda (Netherlands) touched on Giba’s prior hardships in his introduction, saying: “Sometimes in the setback, you find the treasure for the future.

Giba was unable to attend due to unforeseen travel circumstances, but his longtime friend Dega de Gama accepted on his behalf and in a recorded an acceptance video Giba stated: “My name is there together with many Brazilians and many players from around the world, and I am very proud to receive this honor. Thank you so much for this.”

Arguably the greatest female player in the history of the game, Artamonova Estes was inducted into the Hall as a female indoor player. She made her Russian national team debut in 1991 at the age of 16 when Russia was competing as the Soviet Union. One year later she played in her first of six consecutive Olympic Games, the only female indoor player to have accomplished that feat.

Described by 1989 Inductee Doug Beal (USA) as the “definition of great over time” for how she stayed at the top of the world for so long, Artamonova Estes accepted her award, stating through her husband and interpreter Jeri: “I am very proud to be in the Hall of Fame, it’s a big honor. It makes me remember and think about six Olympic Games. I cared about the sport so much that I hardly even realized that I was in six Games and participated so much. I hope that my example for young players sets an example that they realize if there is something that you want to do and you set your mind to it, that you are going to be able to accomplish it if you put the work in.”

Nicknamed “The Professor,” Toyoda was inducted as a leader. Toyoda revolutionized the sport on many different levels, from his creation of a weight training program to increase jumping power that aided the Japanese men’s and women’s teams in medaling at three consecutive Olympics starting in 1964 to starting high school and primary championships throughout Japan. But his footprint reaches well outside of his home country, as Toyoda served as an FIVB international official from 1965 to 2013. He ascended to the presidency of the FIVB Rules of the Game Committee in 1980 and kept making his mark throughout FIVB leadership, including helping standardize FIVB rules and introducing the libero position and rally scoring.

Introduced by Beal, who stated: “It’s not often that someone is involved in and significantly responsible for a paradigm shift in the world they live in.” Accepting his award and speaking in both English and Japanese with an interpreter, Toyoda relayed that visiting Holyoke was a dream come true as he translated a volleyball book from English to Japanese and learned that the sport was born in the city.

Toyoda said: “I knew then that I wanted to visit and tour the city, the place that was the birthplace of volleyball. I am delighted that the dream that I held 56 years ago has been fulfilled. I am overjoyed and it is a deep honor for me to be inducted into the Hall of Fame. Over the last 60 years, I have worked as hard as I can to help and assist in the growth of the sport because I love volleyball. I would like to express my appreciation for those who recognized this effort.”

Overcoming challenges both on and off the court, van de Goor was inducted as a male indoor player. He was a middle blocker who starred on a team with several Inductees, including Peter Blange (2012) and Ronald Zwerver (2017).

Van de Goor carried the Dutch team through the 1996 Olympics and led the Netherlands to its first-ever Olympic Gold medal in one of the sport’s most thrilling finals. The Dutch claimed the European Championship in 1997 and van de Goor, along with his brother Mike, competed in the 2000 Olympic Games. Despite the team finishing fifth, van de Goor was named the Most Valuable Player.

In 2003, van de Goor was diagnosed with Type 1 diabetes, and he noticed that sports had a positive effect on his symptoms and continued playing for two more years. He founded the Bas van de Goor Foundation to help improve the quality of life for people with diabetes through sports and wrote a book called “High on Insulin” to highlight how it’s possible to live a complete life with diabetes.

In 2016 van de Goor suffered another health setback when he was diagnosed with lymphoma, and he underwent aggressive chemotherapy to fight the cancer. He learned in May 2017 that his treatment was successful.

In introducing van de Goor, Zwerver fondly compared Bas to a bike “because he is the oil, because you need him.” Later, he was surprised by a touching and heartfelt video montage of his past teammates congratulating him for this honor.

“I have learned great lessons in the game of volleyball,” van de Goor said in accepting the induction. “First, be clear about your goal and work unconditionally for this goal. Second, you are at your best if you find joy at what you do, and third, inspirational energy and trust is fundamental for growing and succeeding.”