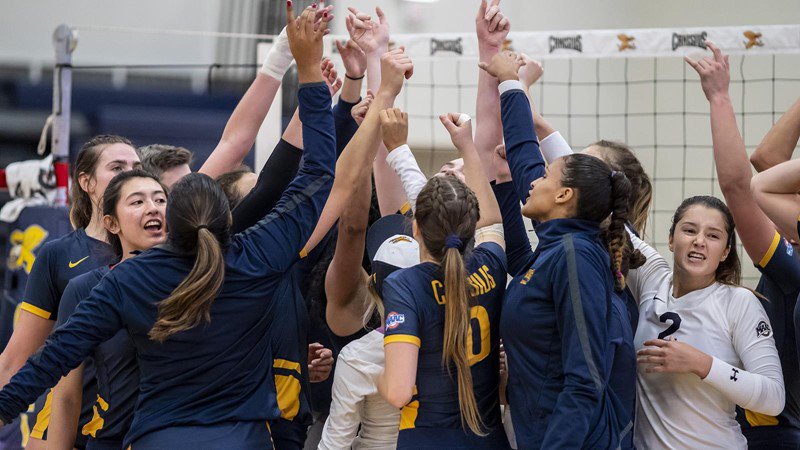 Canisius is off to a 6-2 start in the MAAC play, the team’s best since 2012, and posted two sweeps on the weekend, its first such effort since 2013.

Saturday’s 25-15, 25-20, 25-16 win over Fairfield kicked off the action, but also marked a major upset as the Stags had not dropped a conference match in its last 58 tries, dating to Oct. 22, 2015. The streak was the longest in the NCAA and also a MAAC conference record.

The Golden Griffins won by scores of 25-15, 25-20, 25-16 en route to ending the Stags’ 58-match MAAC winning streak (counting regular season and postseason contests), which dated back to Oct. 22, 2015. That 58-match conference win streak was the longest active win streak of its kind in the NCAA, and set a MAAC record. Saturday also marked the first time Fairfield was swept in a regular-season conference contest since Sept. 20, 2015, when Canisius defeated Fairfield 3-0 in the Koessler Athletic Center.

With the win, Canisius, which has now won five of its last six contests, improved to 7-9 overall and 5-2 in MAAC play, while the Stags slipped to 8-9 overall and 7-1 in conference action.

The Blue and Gold came out of the gates red-hot, posting a .393 team hitting percentage in the first set, while Fairfield hit -.065 in the opening stanza. In that first set, Wesley pounded down a team-high four kills to go with two block assists, while junior setter Cassidy Ceriani was credited with 11 assists. In the second set, Simmons put four balls down for the Griffs, while Ceriani added 10 assists and six digs. Canisius led 19-18 in the later stages of the second set before a Fairfield attack error pushed the Blue and Gold to a 20-18 margin. From there, the Griffs outscored the Stags 5-2 to secure the win, capped by a kill by Simmons, to put the home squad up 2-0 in the match.

In the third and final set, Canisius turned a 14-14 tie into a 17-14 advantage thanks to kills from Wesley and freshman Melina Woods and a Fairfield attack error. The Blue and Gold took advantage of four-straight Fairfield errors to earn a six-point cushion at 21-15, and then Canisius proceeded to close out the contest with three-straight kills coming from freshman Camila Vazquez, junior Gabrielle Darnaby and Simmons, with Ceriani registering the assist on all three of those Canisius points. The Griffs ended the contest by hitting .252 as a team, while Fairfield posted a team hitting percentage of .079.

Ceriani ended the match with 32 assists, nine digs and four total blocks, while senior libero Sophia Lopez Acosta was credited with 15 digs and a service ace. Darnaby and Vazquez each had six kills in the winning effort for Canisius, while Woods posted five kills as the Griffs improved their home record to 3-0 on the year.

For Fairfield, freshman Emily Schillinger had a team-high seven kills while sophomore Luci Albertson was credited with six kills and two blocks. Freshman setter Alexis Rich had 30 assists in the loss for the Stags, while senior libero Taylor Rudeen posted 19 digs for the visiting team.

Head Coach Lenika Vazquez‘s Postgame Comments
“This win feels good. I don’t want to make this less of an accomplishment than it is, because every win feels great. But It does feel good to say that we beat the top team in our conference. It shows me and our team, and everyone else, where we stand as a team moving forward. Our team has really learned how to communicate this year. Today there was a lot of communication about what we were blocking and making sure that we were following our scout, and I think that made a huge difference for us.”

Game Notes
• Saturday marked the 44th all-time meeting in volleyball between the two Jesuit schools, with Fairfield leading the series 31-13. Prior to Saturday’s win by the Griffs, the Stags had won eight of the last 10 meetings between the two conference rivals.
• Canisius is now 3-0 at home in conference play for the first time in program history.
• Simmons now has nine or more kills in all seven MAAC matches to date.
• Ceriani’s 32 assists on Saturday gives her 30-plus assists in nine matches this year, including six straight.
• With the conference win on Saturday, third-year head coach Lenika Vazquez moves into second-place on the program’s career coaching MAAC wins chart.

Up Next
Canisius will close out its weekend homestand on Sunday afternoon when the Griffs play host to Quinnipiac in the Koessler Athletic Center. Game time is set for 1 p.m., and the match will be broadcast live on ESPN3.