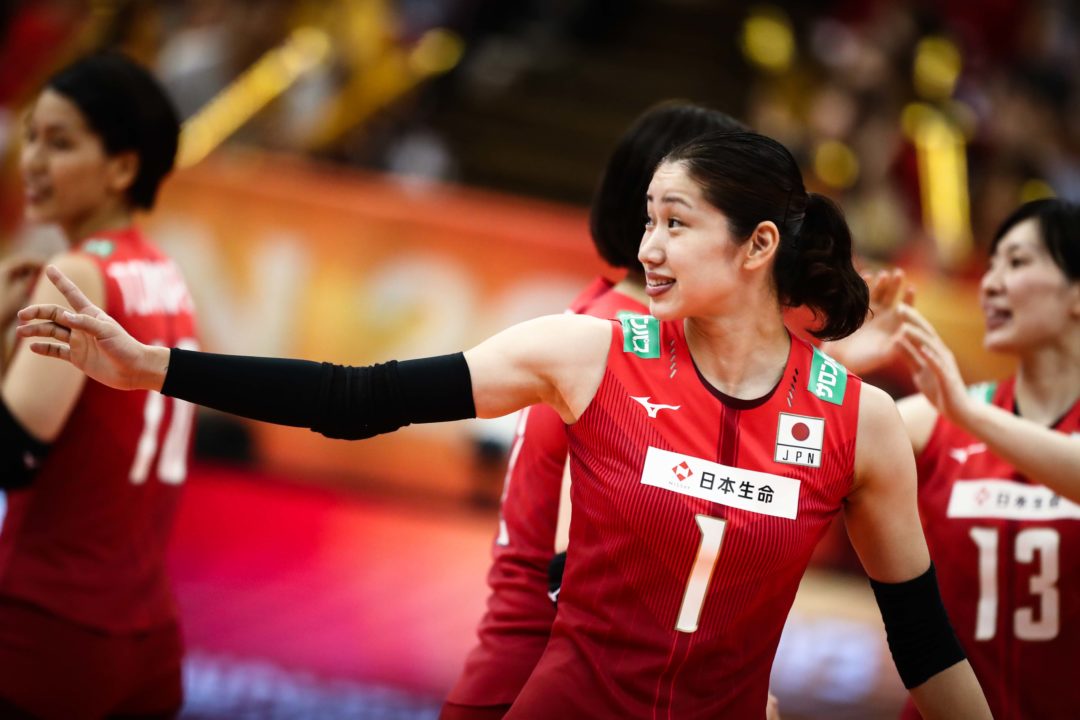 After a dominant first set, Japan was knocked on their heels in front of a huge home crowd on Sunday. Current Photo via FIVB

Things got a little hairy, and almost got very hairy, in Pool E on  Sunday to open the 2nd round of play. The softer, but probably more balanced, of the two second-round pools saw one big upset when Germany (our sleeper pick in the pool) knocked off a reeling Brazilian side 3-2; and almost saw another when the Dominican Republic fought back to force a tiebreaker against Japan, though Japan ultimately came out on top.

In the other two matches, Serbia and the Netherlands remained undefeated with relatively-easy 3-0 sweeps over Mexico and Puerto Rico, respectively.

The Serbian machine marched on into round 2, even without outside hitter Bojana Milenkovic, who will be off the court for at least 6 months with a knee injury. They hammered Mexico on Sunday, eliminating them from Final 6 contention. Serbia remains the only team to have not lost a set, in spite of the fact that they still haven’t gone a full match with their starting lineup on the court.

The team’s top two hitters, Brankica Mihajlovic and Tijana Boskovic, continued to hammer away with 10 and 11 points, respectively. Combined, those two hit 63% in the match, leading a team effort of 60% hitting.

Stefana Veljokvic entered the fray late in relief of Milena Rasic and again showed how much depth this Serbian team has: she hit 6-for-7 and added 1 block. Combined at the position, the two combined to go 9-for-11 with 3 blocks and 12 total points. That’s big production out of the middle for the Serbians.

Samantha Bricio continued to run the court from the service line for Mexico, adding 2 more aces as part of an 8-point effort, but that plus 14 points from Andrea Rangel wasn’t enough for Mexico. 16-year old phenom Melanie Parra Quintero was back on the court for the Mexican side after some injury concerns earlier in the tournament and missing the team’s last match. She hit 7-for-14 and had 8 points as Mexico continues to bring her along slowly.

“It is difficult to play so early,” said Serbian coach Zoran Terzic of the 10:10AM local start time. “We played well enough to win. All the players got to play. That could help us later. Now we have to focus on Germany tomorrow. We are in good shape.”

Germany suddenly appears as a dangerous team in this tournament after knocking off Brazil later in the day on Sunday.

If German coach Felix Koslowski is right, and a 2-0 comeback happens against Brazil “once in a 100 matches,” then his team picked the right moment to catch fire.

After a disastrous opening set, which Brazil won 25-14, Germany improved in every frame, and ultimately forced a tie-breaker that they won in extra points to take the match. Brazil still has a slight edge in the table over Germany for 4th position (Germany has won a pair of 3-2 matches), but they have given themselves an avenue to play their way in to the Final 6, even if that might mean having to beat Serbia on Monday.

Louisa Lippmann was again key for Germany, scoring 36 points on 31-for-60 hitting plus 1 block and 4 aces. She scored 20 of her 36 points in the 3rd and 4th sets, where Germany swung momentum, as compared to just 12 in the first two combined. She is now the tournament’s leading scorer.

Captain Maren Fromm scored 20 points as Lippmann’s 2nd, and Ivana Vanjak had 5 blocks in just 2-and-a-half sets of play before being relieved by Barbara Wezorke, who was less successful (just 1 point and no blocks in 3 sets). No explanation has been given for the change, in spite of it seeming clear that Vanjak was having the better match, though Wezorke’s presence did coincide with the winning sets for Germany.

Tandara Caixeta looked as good as she has after a nagging pre-World Championship injury, scoring 29 points including 28-for-49 hitting (57.1%). The rest of Brazil combined to hit just 49% in the match.

Brazilian coach Jose Guimaraes took the blame, saying that their system didn’t function well after the 2nd set. “We will have training from now to get better and try to continue to improve.”

As the arena in Nagoya began to fill up in anticipation of the Japanese women in the evening’s finale, the Dutch put on a clinic in international volleyball, dominating Puerto Rico in 3 sets. While the Dutch did give up a fair amount of errors, they remained up-tempo and aggressive even with a major lead, dominating in the blocks column (9-2) and the aces column (6-1) in the match.

They were led by a trio with 12 points each: Yvon Belien, Lonneke Sloetjes, and Anne Buijs. Sloetjes scored most of her points offensively with 11 kills on 23 swings; while Belien and Buijs each had 8 kills and 3 blocks. All 3 players had an ace in the match.

“I think we did good with service today,” said the captain Balkestein-Grothues. “That made a difference and put pressure on them. We also had a good sideout. Now we will focus on the Dominican Republic for tomorrow. We played at a good level. Our serve has improved in the past days.”

Nicole Koolhaas and Belien were the choices for coach Jamie Morrison at middle, the least-settled position for the Dutch side. Celeste Plak split time with Maret Balekstein-Grothues at outside hitter and scored 7 points; the Dutch also rotated at setter between Laura Dijkema and Britt Bongaerts.

“We are happy with the victory,” Dutch head coach Jamie Morrison said. “In the locker room we talked about everybody doing their job. We let down in the third set and let Puerto Rico back in the match. Physically, mentally and volleyball wise we wanted to be in top shape this week. That is important as the week goes forward.”

Riding the momentum of a nearly-sellout-crowd, Japan looked early in this match like they were going to roll to another full-points victory, which after the Brazilian loss earlier in the day would have given them a commanding lead for the 3rd position in the pool.

Instead, the Dominican Republic came alive in the 2nd set and forced a tie-breaker.

As Japan’s serve went, so went the team. While they had an overall 8-4 service advantage in the match, much of that was concentrated in the opening frame. While the Dominican Republic historically struggles against good serves, when they’re able to play in system, they’re a dangerous team given their huge front line and potent offense led by 6’7″ Brayelin Martinez. She had 19 points and hit 19-for-37 for the team in the match.

For Japan, Sarina Koga led them with 23 points, but after an efficient tournament to this point, she struggled with some of the hitting problems that she saw earlier in the match. She hit just 22-for-65 on Sunday (33.8%), which is well below her tournament average that sits in the 40s.

Ai Kurogo scored 20 points in the first 4 sets for Japan, but head coach Kumi Nakada made wholesale changes for the 5th-set tie breaker, benching Kurogo, outside hitter Yuki Ishii, and setter Kanami Tashiro, with a group of reserves sparking them to the win (most notably, Miyu Nagaoka, who had 7 of her 9 points in the waning minutes of the 4th set and the 5th set).

Mai Okumura had 11 for Japan in the middle, including 4 blocks.

After the loss, it would take a near-miracle for the Dominicans to advance, though it’s still mathematically possible.