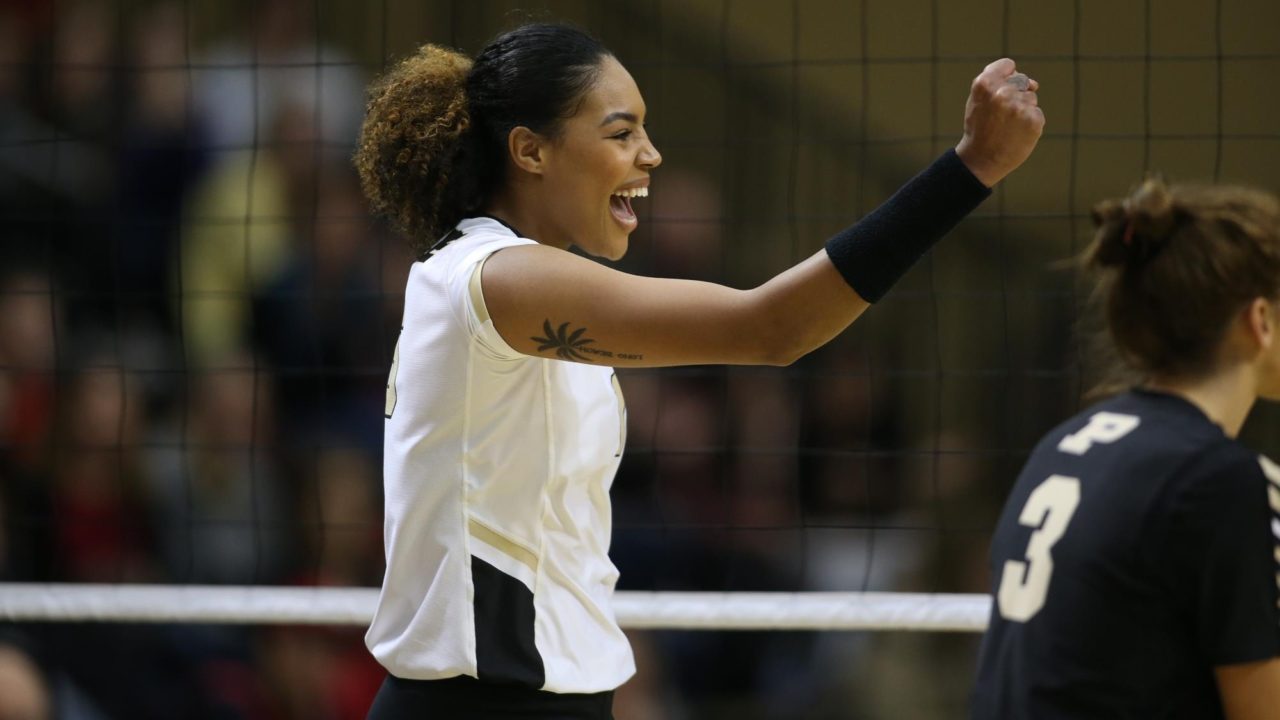 Purdue snapped a 13-match losing skid against Penn State, rallying from down 20-13 to steal away Set 3 and continuing on to victory after trailing 2-0 in the match.  Current Photo via Purdue Athletics

UNIVERSITY PARK, Pa. – Purdue snapped a 13-match losing skid against Penn State, rallying from down 20-13 to steal away Set 3 and continuing on to victory after trailing 2-0 in the match. The win marked just the Boilermakers second over PSU since 1987 (also Oct. 8, 2010 in West Lafayette), a string of 54 matches (53-1).

Taylor Leath was tops for the Nittany Lions with 21 kills and 12 digs, while hitting .333. Nia Reed notched 18 kills, while Kaitlyn Hord added 10 putaways and hit .421.

Penn State cruised in Set 1, going up 15-7 after Purdue started the match with four straight errors. The Boilermakers got within five at 15-10, but PSU closed out the set on a 10-1 run, including three kills and a block by Serena Gray.

Purdue kicked off Set 2 on a 4-0 run, including three Nittany Lion miscues. Down 10-7, Penn State rallied for its first lead of the stanza at 14-13. The teams traded points from there, tying eight times, last at 21, before the Nittany Lions managed a 4-1 run to cap the set (25-22) on a Leath kill.

Penn State looked to be primed for a sweep, jumping ahead 20-13 in Set 3, but Purdue crawled back into the set with a 6-0 run with Jena Otec at the endline. A Leath putaway stopped the Boilermakers momentarily, but they completed the comeback with another 6-2 push, including three PSU miscues and two blocks.

The Nittany Lions bounced back to go up 7-2 in Set 4 with Gray supplying a kill, a block and an ace. Trailing 9-4, Purdue began to chip away and worked back to a tie at 13-all with help from two kills and a block by Jael Johnson and two kills each by Atkinson and Newton. Later, facing a 18-15 deficit, the Boilermakers came through with a 6-1 run including kills by four different players. A Mohler putaway made it 24-21 and she added another to seal the 25-22 win.

Penn State boasted an 8-5 advantage at the changeover in Set 5 and carried on to a 12-9 lead. Atkinson downed two kills and PSU contributed two hitting errors amidst a 5-1 run that saw Purdue earn the first match-point try at 14-13. Neither side would concede, combining for four more attempts. Down 18-17, Purdue got kills from Marissa Hornung and Atkinson before a hitting error by Jonni Parker gave the Boilermakers the historic victory.