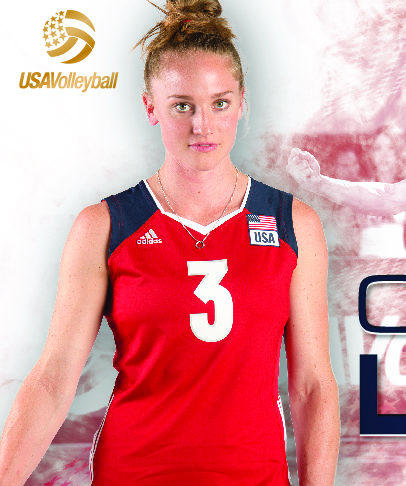 USA Volleyball has named setter Carli Lloyd as the 2017 Female Indoor Player of the Year. Michelle Bartsch-Hackley was selected as the... Current Photo via USA Volleyball

Lloyd, who was the backup setter to the now-retired Alisha Glass at the 106 Olympic Games, took on a new role in 2017 both in a starting role and as the team captain for the American women. She started 15 of the team’s 26 senior squad matches over the summer, including all 9 of the preliminary matches at the FIVB World Grand Prix. That team made it to the Final Round with a roster that included only one other Olympian besides her. She scored 39 points out of the setter position with 11 kills, 20 blocks, and 8 aces while leading a young and inexperienced offense.

She started both matches of the USA Volleyball Cup against Brazil, matches that Team USA split with more of their Olympians back, and then fought through injuries at the Grand Champions Cup to end the season.

“Through our 2017 summer competitions, lineups, opponents and countries changed, but one thing stayed constant: Carli Lloyd,” U.S. Women’s National Team Head Coach Karch Kiraly said. “She led a new group through real adversity to a series of tough wins during World Grand Prix, battling the world’s best.  She faced even greater adversity with an injury in World Grand Champions Cup, yet from start to finish, Carli maintained a relentless devotion to making people around her better and helped USA to a strong start in the new Olympic quad.”

“I feel thankful and extremely honored to receive this recognition,” Lloyd said. “To be selected means that my efforts this summer positively affected my team and the USA program and this is a great focus of mine on a daily basis. I strive to bring the best version of myself each day with hopes that it can make those around me better as well. I love this sport, I love to compete and I still have goals that I am striving to reach with this USA team. Receiving this award shows me that I am on the right track and that there is more work to be done.”

“Job number one with USA is to be a learner, to get better every day,” Kiraly said. “Michelle has accomplished that task every year she’s been with the program, and this season she got her biggest chance yet to show the results. We value players who find multiple ways to contribute, and Bartschy did that in every phase of the game. Her all-around consistency had a big impact on our results, and on the momentum USA carries forward in the Olympic cycle.”

“Representing USA is something so special and I can’t say enough about playing for my country,” Bartsch-Hackley said. “It’s such a great honor to be recognized as Most Improved Player. I believe it is important for every young girl to know that you can always learn something new. The honor is also a reflection of all the great coaches I’ve had. I was lucky enough to have a great college coach who was a teacher and taught each of us to be learners and try something new; even if it wasn’t comfortable. Especially if it wasn’t comfortable, actually. I’m in my fifth season professionally and I still feel like I have so much to learn and get better at.  I am just working towards my goals and trying to get a little better each day.”

Bartsch-Hackleymade her first FIVB match appearance in July of 2016, when she was already 26-years old. Now, in the summer of 2017, she became a focal point of the American offense at the Grand Prix, including having the 3rd-best receiver in the tournament (59.55% efficiency) and 2nd-best in serving efficiency (.46 ace/set).