Croatia – Serbia Derby Headlines the Day in the Champions League 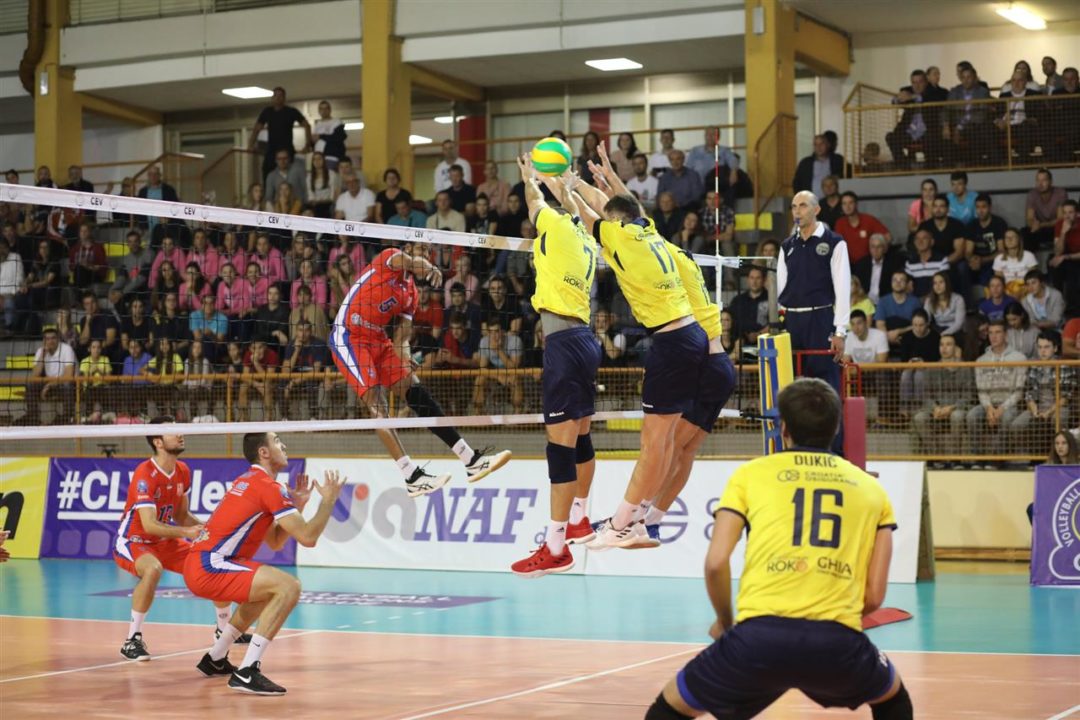 Lazaro Travieso led Vojvodina of Serbia with 30 points on 24 kills and 6 aces in the 3-2 win.  Current Photo via CEV

While the two nations were once a part of Yugoslavia, the two countries have not always shared an amicable relationship. They were embattled in a war for Croatian independence until 1995 and established diplomatic relations in 1996. The last time Mladost Zagreb and Vojvodina NS Seme Novi Sad had played each other in volleyball was back in 1999 in the CEV Champions Cup. Mladost Zagreb’s participation in European competitions predates the Champions League, and this was their first appearance in Europe’s seminal tournament.

With such history, and a shared border, it was only fitting that the match go 5 sets. It did not look like that would be the case as Vojvodina jumped out to an early 2-0 lead. Mladost came roaring back to take a tight 3rd set and a commanding 4th set victory to send the match into the tie-break. Vojvodina jumped out to an early lead in the 5th before Mladost pulled within 2 points at 13-11. It proved to be too little, too late as the Vojdovina put away the set and the match 15-13.

Lazaro Fundora Travieso led the match with 30 points for Vojvodina.  His 24 kills were impressive, but his 6 service aces were phenomenal. David Mehic scored 27 points with a match-leading 27 kills. He hit .559 (63%) for the match. Dmytro Viietskyi scored 14 points from the opposite position on 13 kills and a service ace.  Stevan Simic and Stefan Kovacevic scored 7 and 8 points in the middle respectively. Ivan Kostic came off the bench to set for Vojvodina in the 3rd set and closed out the match.

While Mladost had 18 fewer kills than Vojvodina (79-61), what kept them in the match was their block.  They out-blocked the Serbian side 16-3. Ivan Mihalj put up a staggering 8 blocks in the match. He also contributed 5 kills on 7 swings without committing an attack error to finish with a .714 hitting percentage (71%). Marino Marelic scored 15 points on 13 kills, 1 block, and 1 service ace. The other outside hitter, Marko Sedlacek finished with a team-high 27 points on 23 kills, 3 blocks, and 1 ace. Kruno Nikacevic came off the bench in the 3rd set to play opposite. He ended up scoring 14 points on 14 kills with a .542 (58%) hitting percentage.

Both of these teams will play again on October 17th in Serbia. A win by Vojdovina will see them through to the next round. If Mladost wins in 3 or 4 sets, they will move on to the 2nd Round. If they win in 5 sets, a Golden Set will have to be played.

Do you ever refer to British and French team clashes as derbies?

I couldn’t tell you the last time that the British and French team played. Also, Britain and France have never been the same country (though they very-nearly became one in 1940). Britain and France also do not share a land border (unless you count the chunnel as ‘land,’ which I don’t think that anybody does).