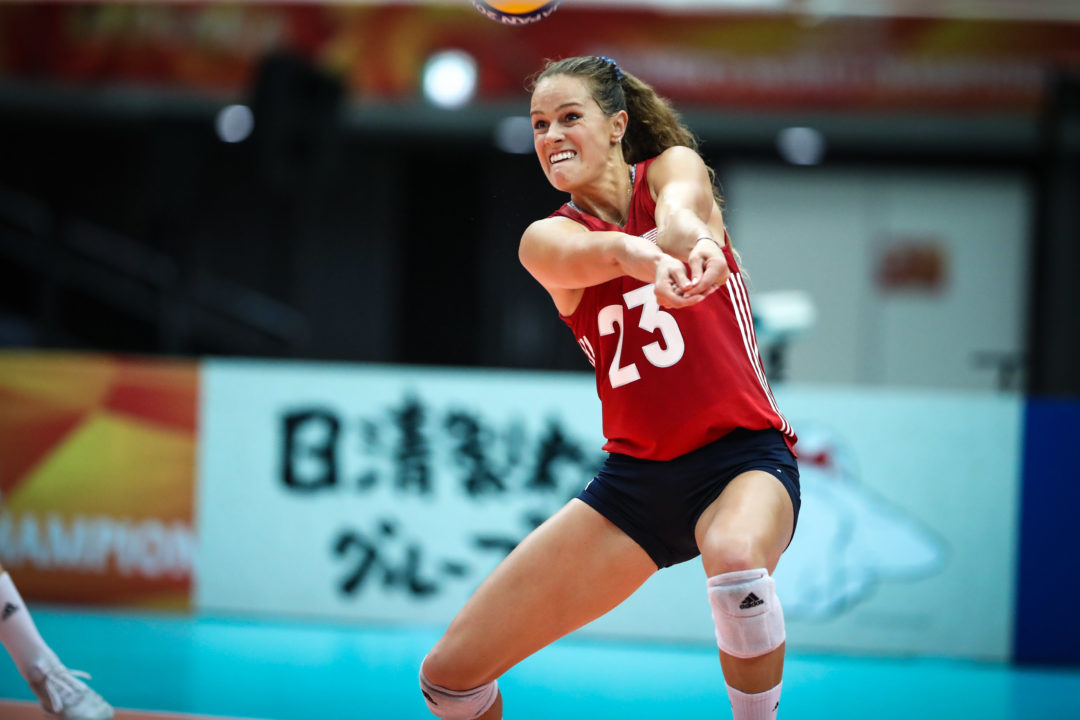 Kelsey Robinson is settling in nicely to her new role as the American libero. Current Photo via FIVB

American libero Kesley Robinson is leading all qualifying players still playing at the 2018 FIVB Women’s Volleyball World Championships in serve-receipt efficiency. That’s not bad for a player who spent most of her career at outside hitter until May, when American coach Karch Kiraly called on her to help shore up the American side defensively.

The next best Americans in the category are veteran outsides Jordan Larson (30.23%) and Kim Hill (28.97%). Robinson also leads the Americans and ranks 12th in the tournament with 2.38 digs/set.

As Robinson pointed out in her post-match interview after her first time playing libero this summer, she actually got her first invite to National Team camp as a libero several years ago, so her transition to the position shouldn’t be much of a surprise. But it is a pleasant development for an American team that is stacked at the hitter positions, but who were lacking stability at libero.

The path to the World Championship right now seems like it’s going to run through the Serbian women. If (or when) the Americans run into them, that will be the biggest test of Robinson at libero. The Serbians rank 2nd in the tournament with 1.91 aces/set, and they lead the tournament with a 55.6% hitting percentage (5% better than the next-closest team, the Italians). They will pound shots at the Americans and will give Robinson her biggest test yet at libero. When the teams played in the Nations League, Serbia won 3-1, but the Americans limited them to 3 aces and just 38% hitting, but that was without Brankica Mijalhovic and Tijana Boskovic: the team’s top two hitters.