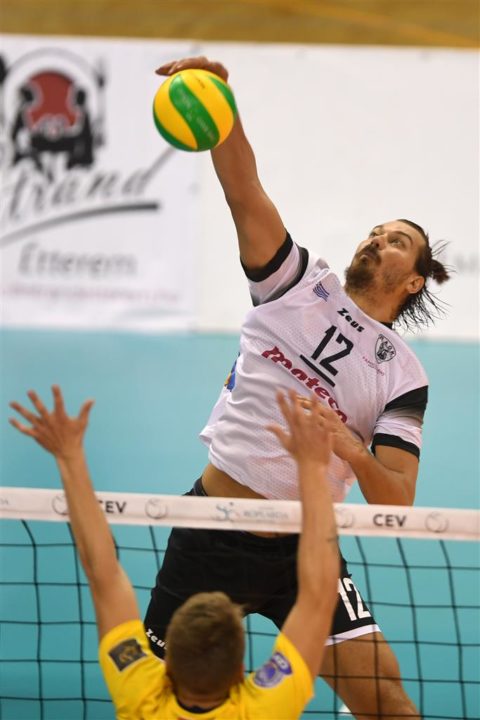 Mitar Djruic marked his return back to Greece in an exciting fashion. After playing throughout Italy and Turkey since 2011, the opposite for PAOK Thessaloniki put up 26 points in a tie-break win over Hungarian side VRCK Kazincbarcika. Djuric led the match with 23 kills in addition to his 3 blocks and 1 service ace while hitting 40%.

The Greek champions set themselves apart with their block. They held a 16-7 advantage in the blocking department, and that 9-point differential also accounted for the total point differential as well (118-107). They both finished with 4 service aces, their passing rates were comparable (54% for PAOK and 60% for VRCK), and PAOK finished with 1 more kill (72-71).

Evgenios Gkortsaniouk scored 17 points for PAOK coming from 16 kills and 1 block. He was also the team’s leading passer. Ioannis Takouridis scored 15 points in the middle on 9 kills and 6 blocks. He also did not commit an attack error in 12 attempts, hitting 75%. Alexander Shafranovich finished the match with 14 points, playing opposite of Gkortsaniouk at outside hitter. He had 12 kills and 2 service aces.

VRCK was led by a trio of players who all produced 18 points. Mate Banai scored 18 points from the middle blocker position on 14 kills, 1 ace, and a team-high 3 blocks. David Szabo, an opposite, scored 18 on 16 kills, 1 block, and 1 ace. Szalbolcs Nemeth also produced 18 points as an outside hitter. His points came on 17 kills and a service ace. Nemeth was also his team’s leading passer in serve receive.

These teams will play again on October 17th in Greece. If PAOK wins in any fashion, they will advance to the Second Round. If VRCK wins in 3 or 4, they will progress. If VRCK wins in 5 sets, the match-up will go to a 15-point Golden Set to see who advances to the next round.