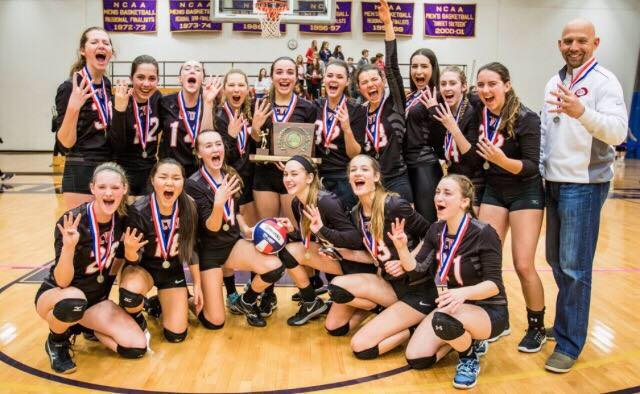 This is the first year Vermont has recognized volleyball as a varsity sport. A little over a year ago, the Vermont Principals Association sanctioned boys and girls volleyball as the newest high school varsity sport to begin for the 2016 season.

Both teams won their respective championships by defeating the boys and girls teams from the same school: Essex High.

The young team lost eight seniors after last season, and took a little while to find their stride and get a momentum going. Once they did, the Redhawks were led by Shannon Loiseau, Lauren Johnson and Natalie Senior who accumulated 30 kills and 16 blocks between them in the championship game. Johnson also added 25 assists.

The team was led by seniors Jeffrey Boliba and Kevin Devine. Boliba set the school record in assists and aces while Devine set the record in kills and digs. They are two of a staggering 13 seniors on the roster.

Currently there are only six high schools with varsity boys volleyball teams, and that number will need to increase to 10 by 2018 for the state to keep the sport at the varsity level.

Volleyball has been steadily growing in Vermont high schools, and after three years of club seasons, the move to varsity status should keep large numbers coming back to the sport for years to come.