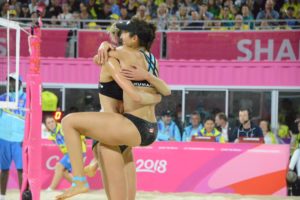 While calling a match between Australian pair Christopher McHugh/Damien Schumann and St. Kitts and Nevis pair St Clair Hodge and Shawn Seabrookes, she referred to the pair from St Kitts and Nevis as looking like “human lamingtons covered in sand.” A lamington is an Australian cake where traditionally a sponge cake is dipped in chocolate and rolled around in coconut. Hodge and Seabrookes are both black.

Hodge carried his country’s flag in the opening ceremony on Wednesday.

Pottharst issued an apology on Sunday: “I made a comment I unreservedly apologise for and sincerely regret. It was 100 per cent not meant to offend.”

Did one of the Channel 7 commentators of the Commonwealth Games earlier refer to international black athletes competing in beach volleyball resembling a ‘human lamington’ when they landed into the sand? I wouldn’t be surprised either given it’s @Channel7 #GC2018

Channel 7 took special fire given another gaffe earlier this year, where a Winter Olympics broadcaster said that Chinese competitors ‘looked the same.’ She later clarified that she was referring to their style, not their physical appearance.

McHugh/Schumann wound up dominating the match 21-3, 21-11 thanks largely to a nearly-unmanageable serve from the Australians – including one that McHugh hit at 96 km/hour, which is just 2 km/hour away the tournament record. The entirety of the lopsided first set lasted only 14 minutes. The win guaranteed the Australians of a spot in the quarterfinals.