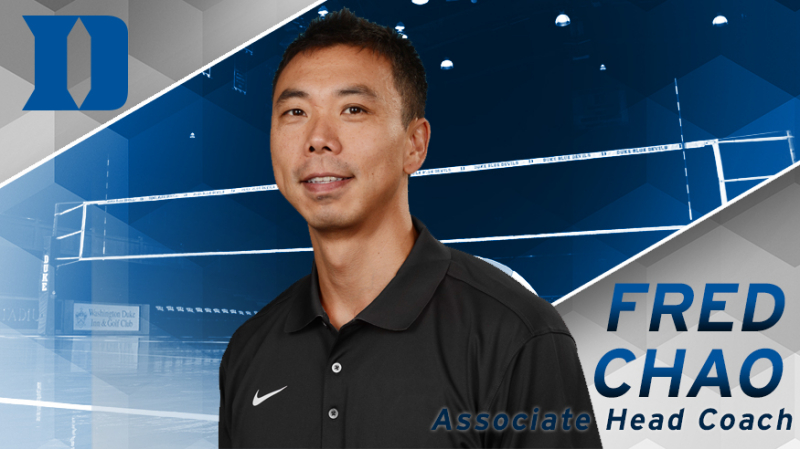 “It has been my pleasure to work alongside Fred this past year,” Nagel said. “I feel this new role is a natural progression for him following the initiative he takes and the guidance he provides for our program. Those qualities, along with his head coaching experience on the men’s side, have all positively impacted our training and scouting. He has helped our program increase our technology skills when it comes to scouting and teaching. In addition, Fred has positively impacted our recruiting efforts and assisted with the very challenging job of scheduling. I look forward to our continued collaboration as we pursue championships.”

In Chao’s first season at Duke, four newcomers joined a corps of nine returning letterwinners to lead the Blue Devils to a 19-12 (11-9 ACC) campaign in 2017. Senior outside hitter Cadie Bates secured All-ACC honors, while freshmen Payton Schwantz and Summer Brown were both tabbed to the All-ACC Freshman Team.

In addition to his abundant collegiate coaching experience, Chao has worked diligently with youth teams and camps at the local, national and international levels. He coached some of the top boys’ players in the nation at the 2002 USA Volleyball Development Camp and was as an assistant coach with the 2005 USA Junior Men’s National Team, traveling to India for the World Championships. Chao also directed the USA Boys Development Camp and was the head coach of the USA Boys and USA Girls Youth A2 Programs.

The Blue Devils are set to open the 2018 campaign at home, hosting BYU for a pair of matches in Cameron Indoor Stadium August 24 and 25.