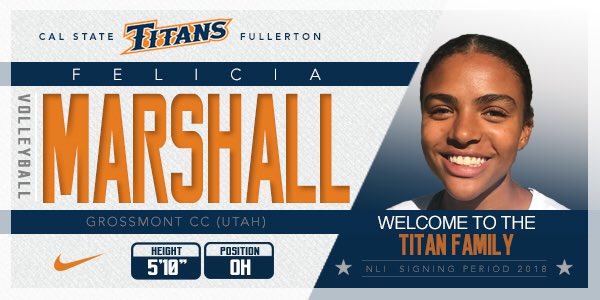 Cal State Fullerton has added a potential impact player and some depth at outside hitter in Felicia Marshall, a transfer incoming from the junior college ranks. A junior-to-be come the fall semester, Marshall will have two years left of play and will be immediately eligible.

Prior to her time at the two-year school, she prepped at Layton Christian Academy where she played on the varsity team for four seasons. That included another list of awards, while she was also a multi-sport athlete who played basketball and track & field.

“I like Cal State Fullerton a lot. It has a good psychology program,” Marshall said with Grossmont College after signing her National Letter of Intent. “I am looking forward to playing volleyball at a higher level and Grossmont has prepared me mentally for that, and pushed me to be a better athlete.”

Cal State Fullerton is coming off of a 5-24 season in 2017 in which they finished last in the Big West at 1-15. They’ll hope Marshall can help a turnaround as she joins three returning outside hitters.

She’s a transfer and the former freshman of the year at Grossmont College. Felicia Marshall will now bring her talents to Fullerton! Welcome to the Titan Family! #TusksUp pic.twitter.com/ROtTbT6jmv