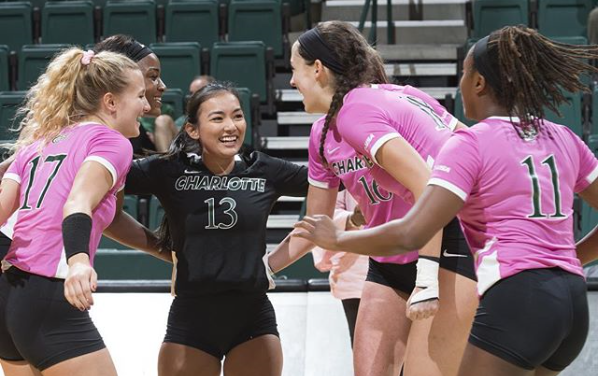 CHARLOTTE, N.C. – The biggest home game of the year takes place Friday night as Charlotte volleyball hosts FIU for their annual Dig Pink match at 6:00 p.m. The C-USA weekend wraps up with Louisiana Tech inside Halton Arena at 1:00 p.m. Sunday.

Charlotte (13-12, 3-6) enters the final five matches of the regular season currently holding the eighth and final tournament spot for next month’s Conference USA get together in Huntington. Six of the Niners nine matches in league play have gone the full five sets including both 3-2 defeats to UTSA and Florida Atlantic last weekend.

FIU (14-8, 6-2) begins a grueling four-game road trip in C-USA play starting Friday in Charlotte before heading to rival Florida Atlantic on Sunday and the combo of WKU/Marshall next weekend. The Panthers are coming off a 3-0 sweep at FGCU on Tuesday. No stranger to five-setters, the Panthers have won two-straight in league play at UTEP and home to Southern Miss in five, after a 3-2 defeat at UTSA. FIU holds the slim 8-7 advantage all-time against the Niners.

Louisiana Tech (6-18, 1-8) enters the weekend having lost eight-straight since their lone Conference USA win 3-1 at Middle Tennessee on September 23rd. Despite the struggles for the Lady Techsters, they have won four of the five all-time matchups against the Niners until Charlotte swept away a 3-0 victory in Ruston last season.

Friday’s Dig Pink match will feature 500 pink T-Shirts to be given away for fans to dawn during the match. The student 49er club will make up a tunnel for pre-game intros, the 49ers football team, Gold Dusters and band will be on hand to hype up the atmosphere, and there will be a silent auction on a pink quilt made up of previous Dig Pink shirts/jerseys. The 49ers newest signee Daniella Cole will also be on hand with her new teammates and deliver the first serve.

On Sunday, the 49ers will feature free youth admission, pumpkins to paint for Halloween, trick-or-treating as well as a post-game autograph session.

Friday’s match vs. FIU will be broadcast on UNCC TV. Fans can watch via Spectrum channel 22, AT&T Uverse channel 99, Google fiber channel 143 and on-campus at 49-1. Both weekend matches, including Louisiana Tech at 1:00 p.m. Sunday, will have the normal live video/stats links available at http://www.charlotte49ers.com.