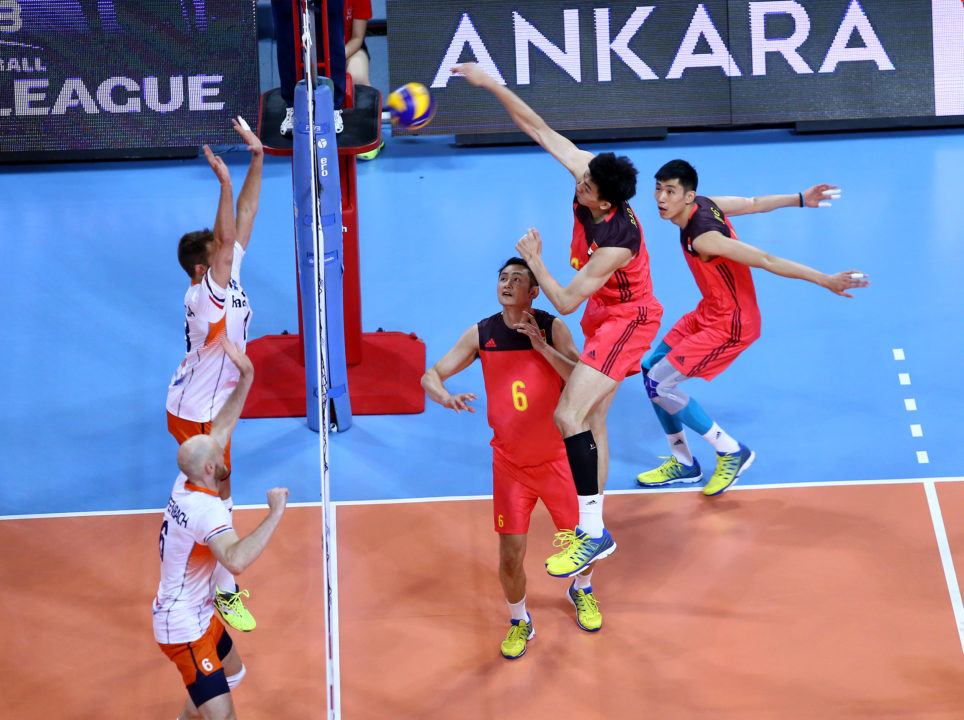 China's Chuan Jiang added another 20 points to his early outpouring, but this time it resulted in a Chinese victory. Current Photo via FIVB

After China wasted a 32-point effort by Chuan Jiang on Friday against Turkey in Group 2, they picked up a crucial 3-1 win over the Netherlands on Saturday/ Turkey, meanwhile, remained undefeated and picked up their 3rd, 4th, and 5th points on Saturday by sweeping group bottom-feeder Egypt 3-0.

Turkey and China now sit 3rd and 4th, respectively, on the Group 2 combined table, and both are still in position to advance to the Final 6 in July.

Another big offensive day from Chuan Jiang of China led to a match-high 20 points in 4 sets, leading 4 Chinese players in double figures. Chuan was successful on 50% of his attempts, with a .305 hitting efficiency percentage (18 kills, 7 errors).

He also added 2 blocks, part of an 11-block Chinese effort. The 2.75 blocks/set on Saturday is a dramatic improvement from the just 1.6 they had on Friday against Turkey.

The Netherlands got 19 points from Thijs Ter Horst that included 2 aces on just 12 service attempts. He was relatively quiet in the team’s opening sweep of Egypt, with just 7 points in 3 sets there. Nimir Abdel-Aziz, who led the Dutch with 17 points in their opener, was quieter in their 2nd game, but still picked up 11 points in spite of starting only 2 of the team’s 4 sets. He was 8-for-11 offensively and also added a block and an ace.

Turkey handed Egypt its second-straight 3-0 loss on Saturday in front of 1,500 home fans in Ankara. Gokhan Gokgoz and Metin Toy had matching 14-point scorelines for Turkey, with Gokgoz putting in a more rounded performance of 9 kills, 3 blocks, and 2 aces.

Shafik Ahmed led Egypt’s very experienced squad in his 138th cap with 14 points – all on attacks. He and Omar Hassan were each very efficient on the day (14-25, 8-14, respectively), but they received little support from the rest of their team.

Egypt’s full World League roster, including 243 caps by their captain Ahmed Abdelhay, has more experience than any other team in the tournament. No player is making their senior international debut at this year’s tournament.