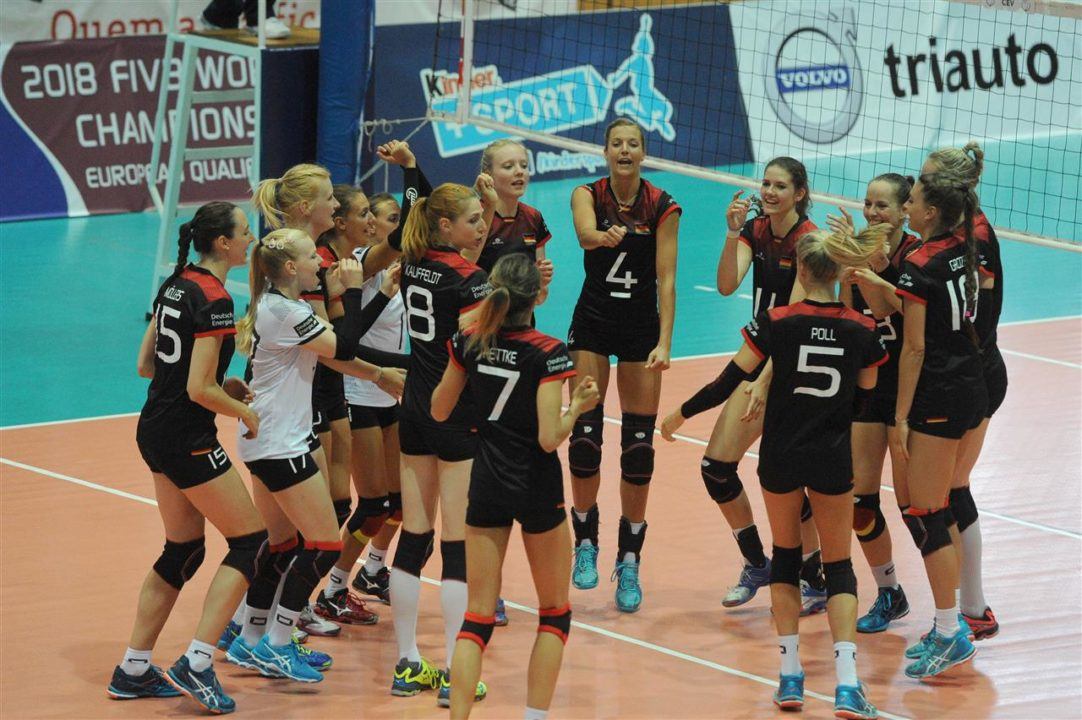 Germany moved to 4-0 in Pool F with a sweep of Finland, while Slovenia sits in second place at 3-1 after a sweep of Portugal. Current Photo via CEV Volleyball

Germany moved to 4-0 in Pool F with a sweep of Finland, while Slovenia sits in second place at 3-1 after a sweep of Portugal. Estonia leveled its record at 2-2 with a five-set thriller against France.

“We started off quite badly because we had problems to deal with their service,” Germany’s Louisa Lippmann said. “Nevertheless, in the third set we showed what we are capable of and we got closer to our real level. When we play as a team, our chances to win increase significantly.”

Piia Korhonen managed 14 points for Finland, with 11 kills and a match-high three aces.

Slovenia managed eight blocks and seven aces and hit at a 46 percent clip in the victory. Portugal also aided the Slovenian cause with 23 errors.

“We did it,” Slovenian coach Alessandro Chiappini said. “We have virtually made it to the third round, which has been our goal since we lost badly to Germany earlier this week in a match where unfortunately we couldn’t reach our best level. I am very pleased because after losing to Germany, we have played three almost perfect matches. It wasn’t easy, since we have been playing under a lot of pressure following that first match. There are some things we can improve, but I could not ask more from these players, who have been working really hard and giving their best for the past four weeks.”

Marta Hurst scored a match-high 17 points, with 16 kills, while Julia Kavalenka chipped in 15 points, with 11 kills and four aces.

In a match decided by just two points (103-101), France won the blocking battle 10-8 and served up nine aces to Estonia’s five, but Estonia came through with a 47 percent hitting effort and rallied from down four in the final set to claim the 16-14 victory and the match.

Kertu Laak led all scorers with 19 points for Estonia, including 16 kills. Nette Peit added 15 points, with 12 kills and two aces, and Raili Kont-Kontson followed with 10 points.

“It will be a difficult match tomorrow that will thrill the home crowd that will be supporting Portugal,” Estonia’s Andrei Ojamets said. “We don’t have many solutions on the bench and we use almost always the same seven players, but Portugal hasn’t had an easy tournament, with 13 sets played in only 4 days so we will try to defend third place”.