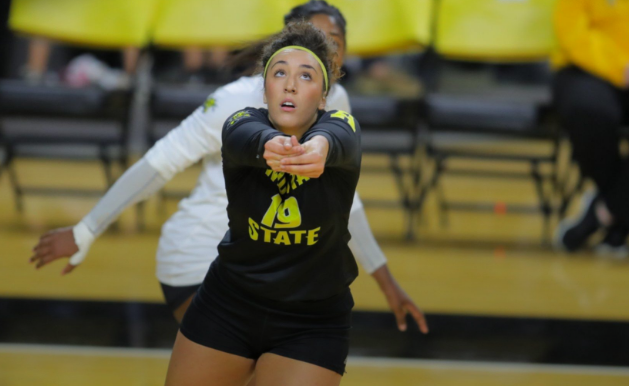 PROVIDENCE, R.I. – The American Athletic Conference has announced the winners of the league’s weekly volleyball honors for the week ending on September 23.

On the heels of earning National Player of the Week recognition, Thompson picks up her fourth-consecutive weekly honor and eighth of her career. She averaged a conference-best 6.00 kills per set while hitting .368 through two road matches. Thompson led the Bearcats with 24 kills and a .268 hitting percentage at Western Kentucky on Tuesday. She then had 18 kills with one error on 31 attempts for a .548 hitting clip in a 3-0 conference-opening win at ECU. Thompson ended the week with a double-double, averaging 2.57 digs per set.

Jordan Thompson has now been named the @American_VBall's top offensive player for the fourth week in a row!#Bearcats | #momentum pic.twitter.com/eQqZdRBlC4

Civita earns her second weekly American honor this year after pacing the Shockers’ back row through a 2-0 conference-opening weekend. The sophomore libero reached the 1,000-dig milestone, recording 7.00 digs per set and a .964 reception percentage, as Wichita State extended its conference winning streak to 22-straight matches. She bumped 27 digs in a 3-2 win over Tulane and had 29 in a sweep over Memphis, which ranks No. 3 all-time in three-set matches in conference history.

After reaching the 1,000-dig milestone, recording 7.00 digs per set and a .964 reception percentage last week, @GoShockersVB's Giorgia Civita has been named the #AmericanVB Defensive Player of the Week!

Melville had another solid performance, recording a double-double of 21 kills and 16 digs in a 3-2 thriller at USF to open conference play. The Knights won the first round of the War on I-4 series. The freshman registered a .980 reception percentage on 50 attempts and averaged 4.20 kills and 3.20 digs per set in the win.

Nordmann hit .405 through two wins, while recording nine blocks, averaging 1.29 per set. She scored 10 kills, while hitting .500 in a three-set win over Temple and knocked down nine kills and six blocks in a 3-1 win over UConn. The Mustangs hit over .240 in each of their first two American matches this weekend.

Walker continues to shine for the Bulls as she completed an all-around strong performance over the weekend. She averaged 3.88 kills and 2.00 digs per set with five blocks, a .325 hitting percentage, a double-double and perfect reception percentage on 33 attempts. Walker led the team with 21 kills and 10 digs, while hitting .340 in a five-set match against UCF on Friday. She had 10 kills and six digs while hitting .296 in a nonconference win over North Florida on Sunday.

Hembree was a force at the net, registering double-digit kills in two wins, while hitting .526 with nine blocks, as Tulsa improved to 5-0 at the Reynolds Center this year. She scored 10 kills without an error for a .556 hitting percentage in a 3-0 win over Memphis to open conference play. She returned to the court Sunday and put down 13 kills, six blocks and a hit .500 against Tulane, as her team completed a 2-0 weekend.

Taflinger played a vital role in the Shockers’ offense to help them maintain an undefeated American slate since joining the conference last season. She averaged 4.12 kills and 2.25 digs per set, while hitting .237 this weekend. She had a double-double of 17 kills and 13 digs in a 3-2 win over Tulane before knocking down 16 kills and recording five digs in a sweep over Memphis.