Clemson Adds Another Transfer in Kaylin Korte for 2017 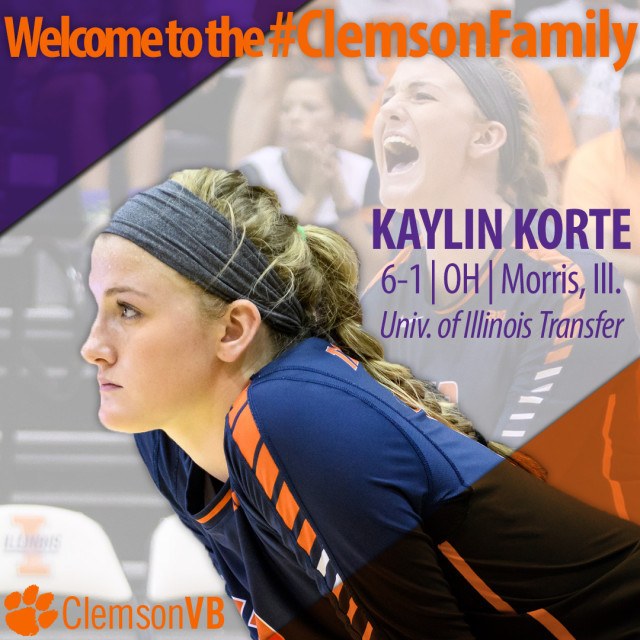 Clemson is bringing on Illinois transfer Kaylin Korte, a 6’1″ outside hitter, for the 2017 season. Korte, who spent one season with the Fighting Illini, will be a sophomore in the fall and have three years left of eligibility. She joins Caroline Pearson, a transfer from Arizona State, as a newcomer to the Tigers with prior Division I experience.

As a freshman at Illinois last season, Korte appeared in two matches and logged three kills and one block. Prior to her stay in Champaign, she attended Morris High School in Illinois. She would go on to total the most kills, attempts and blocks in school history, en route to AVCA Under-Armour All-America Third Team honors as a senior in 2015. She was also listed as a PrepVolleyball top 100 player.

“We are thrilled to have Kaylin join the Clemson volleyball family,” Tigers head coach Michaela Franklin said in the team’s release of the transfer. “She brings us experience and depth on the outside and she has the ability to play the full game. Kaylin is a fun player to watch as she is a true competitor that plays with passion and intensity, and her dynamic style of play will have a huge impact on our program. We are looking forward to working with Kaylin and having her on our side of the net.”

Korte is now one of six outside hitters on the Tigers’ roster for 2017 – although a pair of the outside hitters are also right sides. Additionally, of the other five at the position, two are freshmen with the other three all totaling over 100 kills in the 2016 season. Beyond her position group, she joins Pearson as an incoming transfer to a team with a new head coach, as they look to turn around a program that went 6-26 last season.