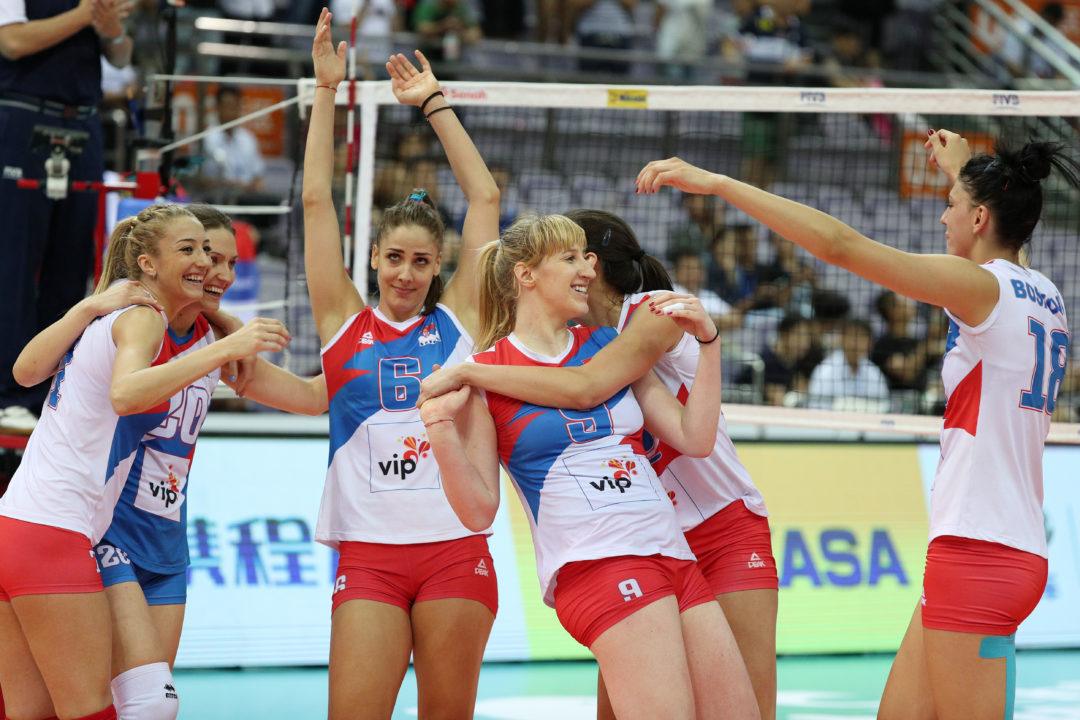 Serbia and China came out on top of the first day of the FIVB World Grand Prix Final Six. Team USA forged a comeback on the Serbians but was unable to handle their strong attack, while China fought through three difficult sets to down Brazil in a sweep. Current Photo via FIVB

Serbia and China came out on top of the first day of the FIVB World Grand Prix Final Six. Team USA forged a comeback on the Serbians but was unable to handle their strong attack, while China fought through three difficult sets to down Brazil in a sweep.

Serbia stepped up early in the match to take the quick 2-0 lead in the match behind strong attacks and blocking schemes. These two things allowed the Serbians to dominate of Team USA despite their strong service game. Team USA fought back in the next two sets, forging a comeback. The American’s had a number of players that stepped up in these two sets to force a fifth and deciding set.

The fifth set was close up until the Serbians took charge to take a three point lead and keep it the remainder of the set to win 15-11.

The detriment to Team USA was Serbia’s Brankica Mihajlovic and Tijana Boskovic. Mihajlovic has been a dominant force throughout the tournament, being the leading scorer after the preliminary rounds, while Boskovic snuck out of nowhere in the final week. In the match, Mihajlovic posted 25 points while Boskovic added another 22.

For Team USA, Michelle Bartsch-Hackley led the team with 17 points, while Lauren Gibbemeyer added another 15 on five kills, six blocks and four aces. Coming in late for the Americans is Annie Drews, who did not play with the team in the preliminary rounds. Drews scored an additional 10 points in the American effort.

China used their homecourt advantage to rally up some momentum in the match to sweep the Brazilians. The first set was a tight race to the finish, while the second set was more relaxed for the Chinese as they took a large lead to win. The final set came down to the wire, with the set going into extra points. China was able to rally through the tough ending to take the 3-0 win.

Though Brazil was not that far behind in statistics, they made a ton of mistakes that was the peril to their success. The Chinese only made eight errors in the match compared to Brazil’s 21.

Leading the Chinese crew was Zhu Ting with 16 points while Changning Zhang added another 15.

For Brazil, Tandara Caixeta put down a match-best 18 points but it was not enough. Ana Carolina Da Silva and Natalia Pereira added another 12 points a piece in the loss.