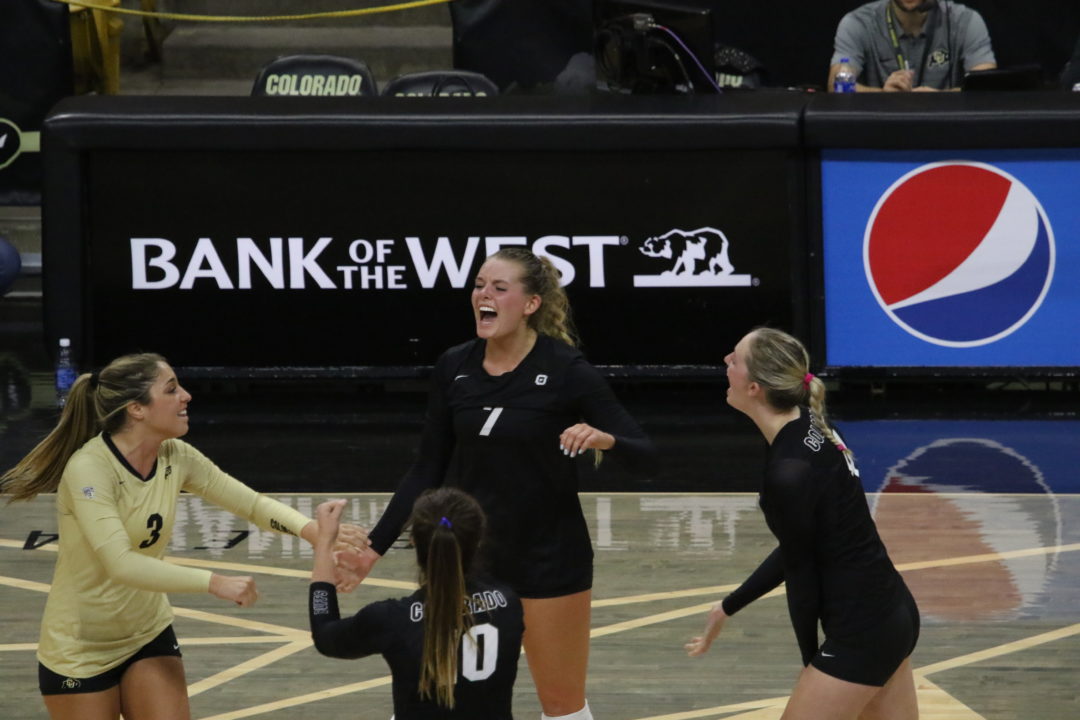 It took 15 tries, but the Buffaloes beat USC for first time in program history.  Current Photo via Colorado Athletics

It took 15 tries, but the Colorado Buffaloes women’s volleyball team has finally beaten the USC Women of Troy. It was an impressive sweep for the home team who have now surpassed their win total from the 2016 season. Set scores were 25-23, 25-14, 25-21. Setter Brynna DeLuzio led the offense to a .262 hitting percentage on the evening by dishing out 37 assists to go along with 7 digs. Frankie Shebby was the leading hitter with 12 kills while Alexa Smith, Joslyn Hayes, and Naghede Abu each added 8 kills. Colorado improves to 15-5 (5-4 PAC-12) and will return to action on Saturday, October 21st to host #18 UCLA.

How Sweep It Is. Buffs take down Trojans in three! #GoBuffs #Pac12VB pic.twitter.com/SLG07n2lf8

The USC offense had a rough evening without star outside hitter Khalia Lanier, who did not play due to an undisclosed reason. Brittany Abercrombie led the offense with 12 kills but the team hit just .067 on the match. USC drops to 14-6 (6-3 PAC-12) and will return to action on Sunday, October 22nd when they travel to Salt Lake City to take on #10 Utah.

BOULDER — For the first time in school history, the Colorado Buffaloes defeated Southern California on the volleyball court, upsetting the No. 19 Trojans 3-0 (25-23, 25-14, 25-21) on Friday night at the Coors Events Center.

WHAT HAPPENED: The Buffs came out on fire and were ready to face the challenge that was USC. Frankie Shebby led the CU attack with 12 kills and three other players had eight kills each for CU: Alexa Smith, Naghede Abu and Joslyn Hayes. Hayes hit a match-high .538 with just one error on 13 attacks, while Abu hit .500 with two errors on 12 swings.

At the net, CU had six players record at least two blocks. Anna Pfefferle led the charge, posting six blocks, while Shebby and Abu each put up five. Smith and Hayes each had three, while Brynna DeLuzio added a pair.

SET 1: The match started off very close, but midway through the set, the Buffs were up by four (16-12). USC was able to cut CU’s lead to deuce at 19-17, but a kill from Smith put CU back up by three. The two teams exchanged the following two points (21-18) and at that time, USC was forced to take a timeout. The Trojans took the first two points out of break and were able to tie the score up a short time later at 22-22, at which point the Buffs took a timeout. USC took the first point after the timeout, but Smith answered with a kill and after a USC attack error, CU had set point. The Trojans took another timeout, but the Buffs took the set after an ace by Gabby Carta-Samuels.

SET 2: The Trojans had to spend their first timeout of the set when CU took a 13-10 lead to the frame. The break did not slow CU down as it increased the lead to seven points (17-10) with a 4-0 run, causing USC to take its final timeout. The Trojans sided-out on the next point, but the Buffs responded with two straight points to go up by eight (19-11). CU easily went on to take the set 25-14.

SET 3: Just like the first set, the third was also close. USC led 12-10 before the Buffs recorded three straight points to take a 13-12 advantage. The two sides battled back and forth. The Buffs reached 20 first and had a three-point lead at 21-18 when the Trojans took their last timeout. USC took the next point, but CU responded with two more points (23-19). The Trojans got back within two (23-21), but CU did not mess around and finished the set with a pair of kills from Abu and Smith.

NOTES: This is the first win for the Buffs over USC…The Trojans lead the all-time series 14-1…USC was the only team the Buffs had not defeated since joining the Pac-12…CU is 7-1 at Coors this season and is 3-4 against ranked opponents…CU is also 4-0 this season when winning the first two sets…This is the second sweep for the Buffs in conference play in 2017…USC has been swept three times this entire season…The Buffs have now surpassed their win total from last season (14) and are one conference win from last season’s total (6).

“That was one of the more complete matches we’ve played all season. Obviously USC is a very good opponent. They have a major player out, so they did some things differently, but we managed our side-out game as well as we have all season. We were very efficient from the middle and from the right. We followed our game plan really well. Our two middle blockers, Naghede [Abu] and Anna [Pfefferle] did a fantastic job reading and closing.”

On Beating USC For The First Time

“I referenced it and had Joslyn [Hayes] talk about it a bit. Everyone we play is really good. There’s not a lot of ‘hey we’re going to get extra motivated for this match.’ We’re up for every match. Every team we play is good. It’s nice to check this one off because we’ve beaten every other team in the Pac-12 since we’ve been in it, so now hopefully we can continue to do that as we move forward.”

On Winning In Three Tonight Before Playing Another Match Tomorrow Evening

“Any time we can take jumps and swings away from our players, it’s a good thing because the season is a grind physically and mentally. We play UCLA and hopefully they went to five sets at Utah and have to get on a plane and come here while we sleep in and rest and relax. Winning in three is great for tomorrow.”

“Yeah it has been a while, as in never so that was really exciting. We all came out on fire. You just kind of tell the freshmen how we have never beat this team and they got worked up too. It was very exciting.”

“We stayed disciplined. I think our blocking defense is really what did it. We were disciplined on our block over low and tight. USC didn’t adjust to it as well so I think that’s what really did it. Our defense stepped up.”

On taking momentum into tomorrow’s game

“We would have had the motivation, even if we would have lost. It really doesn’t change the fact that we have to go into this next game with more urgency, playing more disciplined, and just trying to get to our goals.”

On how memorable this win was

“Honestly I think that it is number two. Number two aside from beating CSU in the non-conference season, in five. So it is up there.”

On balance in stats among team

“I think that can be contributed to our passing being in system, digging multiple balls to get multiple hitters reps, and I think everybody working and doing their job so that everyone had equal opportunity to score. Either the block was open on the other side or we were just being smart and communicating. I think it really attributed to ball handling.”

“I think that our pin blockers did a fantastic job, especially when we went on that huge run. They did a really good job setting up the block and making sure that they didn’t over-run the balls that died inside. Our defense in the back row did a good job of picking up what got past the blocks.”

Colorado out-blocked USC, 12-6, and held the Women of Troy to an abysmal negative .031 hitting rate in the second set to earn their first-ever victory over the Trojans. Frankie Shebby led the Buffaloes with 12 kills while Brynna DeLuzio had 37 assists. No player, on either team, broke the double-digit digs mark.

Despite the sweep, the Trojans battled the Buffs in each frame through a match that had 24 ties and 11 lead changes. USC did not have the services of star sophomore outside hitter Khalia Lanier, who was held out because of an undisclosed illness/injury.