NJIT Rolls Through Belmont Abbey In Three Behind 15 Goodridge Kills 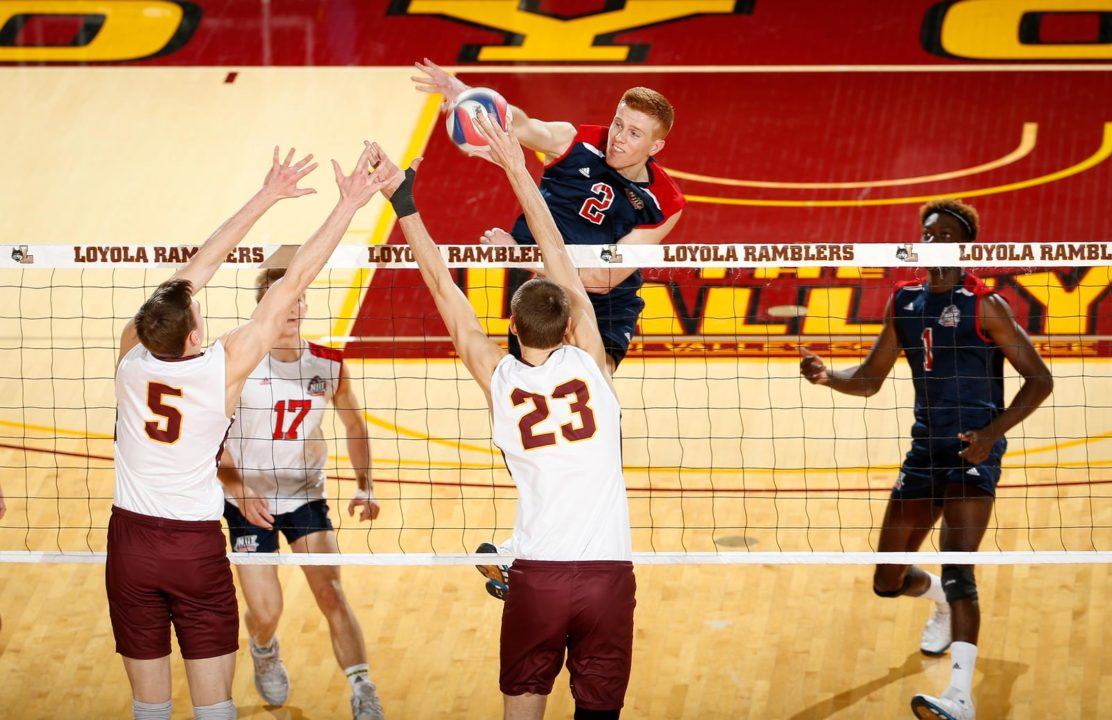 NJIT, winners of the last six-out-of-seven matches, recorded its fourth consecutive victory, improving to 11-7 on the season while Belmont Abbey, falls to 4-12.  The 11 wins for NJIT is the second-highest win total for the Highlanders in the last four seasons (11 wins in 2015).

Goodridge, the leader in the match with 15 kills, combined for a .440 hitting percentage on 25 attempts with just four errors for the Highlanders.  He added five digs and three service aces while the Highlanders held a 7-4 advantage in that category.

Belmont Abbey got off to a quick start in the first set, jumping out to a 6-2 lead.  The Highlanders used a 5-1 spurt, knotting the set at 7-7 on an attack error by Belmont Abbey.  NJIT pushed it lead to 16-12, after four consecutive points, resulting in a Crusader timeout.  The Highlanders continued its strong play, holding a 22-19 advantage on block assists by Goodridge and Luke Robbe and held on for a 25-21 victory, taking the match, 1-0.

In the third set, the visitors started off on a 6-1 spurt and held a 13-9 advantage after a kill by NJIT’s Kevin Myren.  Belmont Abbey cut the lead to three, 10-13, on a kill by Gavin Schaffer.

NJIT scored four straight points, extending its lead to seven, 17-10, on a Crusader error.  Leading, 19-14, the Highlanders rallied off five straight points and went on to record the sweep, 25-17, on a kill by Cameron Tait.

NJIT will return back to EIVA Conference action on Friday when the Highlanders visit Charleston (WV) at 7pm.

Belmont Abbey (4-12) started the match with a 6-3 lead, but NJIT used a 6-2 run to take its first lead. After a Crusader point, the Highlanders added two more points for a 12-10 lead. BAC answered with two points of its own, but NJIT used four straight for a 16-12 advantage. The Crusaders tried to rally, scoring five of the next seven points to trail 18-17, but a pair of kills created enough separation to lead to a 25-21 victory.

The second set started with a 4-2 Belmont Abbey lead, but the Highlanders used a 5-2 run to take the lead. With a 9-8 lead, NJIT scored consecutive points, then responded from a service error with five straight points for a 14-9 lead. The Crusaders cut the margin to four points three times after that, but could never get closer.

NJIT led the third set from start to finish, scoring the first two points enroute to a 7-2 advantage. Belmont Abbey cut the lead to 10-7, but the Highlanders quickly responded with back-to-back points. A 3-0 run later stretched the advantage to 17-10, while four straight points later turned a 19-14 lead to 23-14.

Belmont Abbey returns to action with a pair of matches Friday night. The Crusaders travel to Bristol, Tenn. to face King in Conference Carolinas play at 5 p.m., then take on Quincy in a neutral match at 8 p.m.