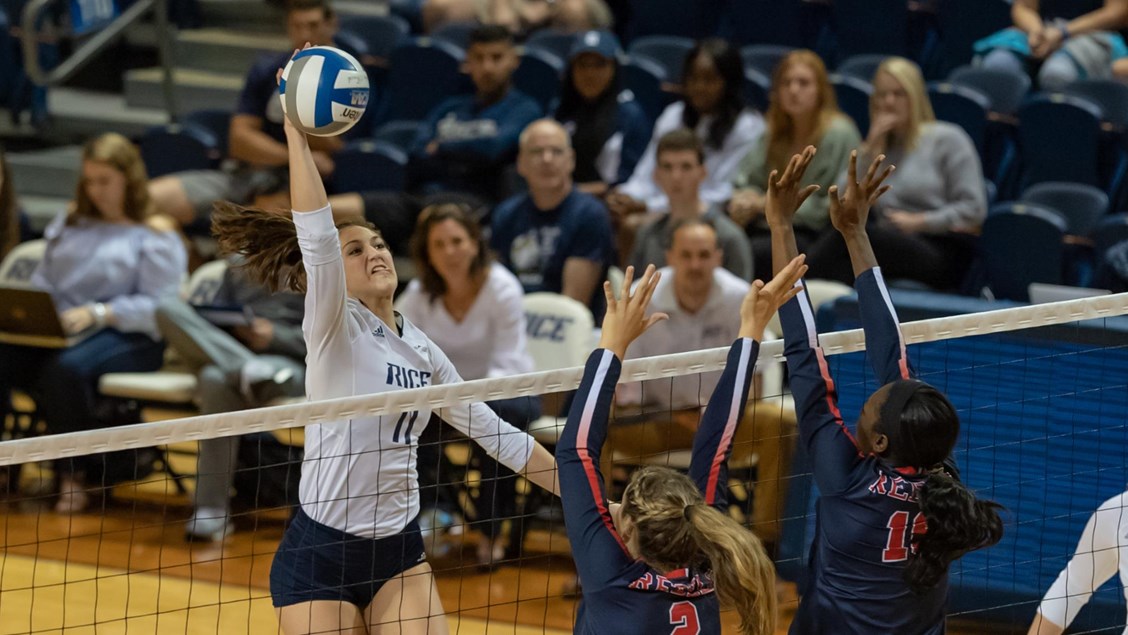 The 2018 C-USA Volleyball Championship will be hosted by Marshall at the Cam Henderson Center in Huntington, West Virginia, from Nov. 16-18. All matches, including Sunday’s title match, will be broadcast on ESPN+.

The Owls strung together a school-record 15-consecutive wins, toppling a mark that stood since 1995, and clinched the league’s regular-season crown for the first time. At 12-2, Rice claimed the No. 1 seed in the tournament with all-conference picks Nicole Lennon, Grace Morgan and Lee Ann Cunningham paving the way. Lennon, the 2017 C-USA Co-Freshman of the Year, lands third in the league rankings with 4.03 average kills. The sophomore has registered 10+ kills in 21-straight matches and leads the team in double-doubles, manufacturing 11 in her final 13 matches of the regular season. Morgan had the hot hand on both sides of the ball, registering league second-bests on a .374 hitting clip and 1.10 blocks per set. Cunningham was a four-time C-USA Defensive Player of the Week. The junior tops all Owls and ranks fourth in C-USA in digs (502) and digs per set (4.83).

Florida Atlantic tied for the highest amount of first-team nods in juniors Sigourney Kame, Massiel Matos and senior Ivone Martinez. The Owls crafted an 11-3 record in conference action, a two-match improvement from 2017, and earned the No. 4 seed in the championship. Kame ranks among C-USA’s top-10 in kills per set (3.62), hitting percentage (.332) and kills (304). Martinez, a five-time C-USA Setter of the Week this season, has consistently sat atop the national rankings with 12.60 kills per set. The Mexico native facilitated the league’s most lethal offense with 15.08 kills per set at a .288-percent attack rate. Matos was key in that success as her 0.42 service aces per set (41) are the highest in the conference and her 3.67 kills per set rank fifth.

North Texas and Southern Miss both notched two selections each. The Mean Green closed the book on the regular season with a seven-match win streak to clinch the championship’s fifth seed. Valerie Valerian owns a North Texas-best 387 kills and 18 service aces. Senior Karley York compiled 1,080 assists at a 10.09 rate per set, good for fourth in C-USA, and her 288 digs lead all Mean Green players.

Sarah Bell became the all-time career assists leader in Southern Miss history when she recorded her 4,757th-career helper on Oct. 16. The San Antonio, Texas, native’s career assists are the second-most of all active NCAA Division I setters. Bell currently has 33 50-assist matches in her career. The senior was also named a C-USA All-Academic selection on Tuesday. Senior Kylie Grandy tops the league with 4.26 average kills and ranks sixth with 0.32 service aces. Grandy appeared on the first-team roster after being slotted on the second squad in 2017.

Rachel Anderson is WKU’s lone first-team honoree. The three-time C-USA Offensive Player of the Week has been both an offensive and defensive threat for the Lady Toppers, boasting C-USA top-10 numbers in hitting percentage (.354), kills per set (3.46) and blocks (0.96). Charlotte’s Yumi Garcia became the second-fastest player in NCAA history to reach 1,000 career digs, doing so in just 49 matches in a 49er uniform. The libero bested her own school record this season with 663 digs (5.62/set) to lead the conference.