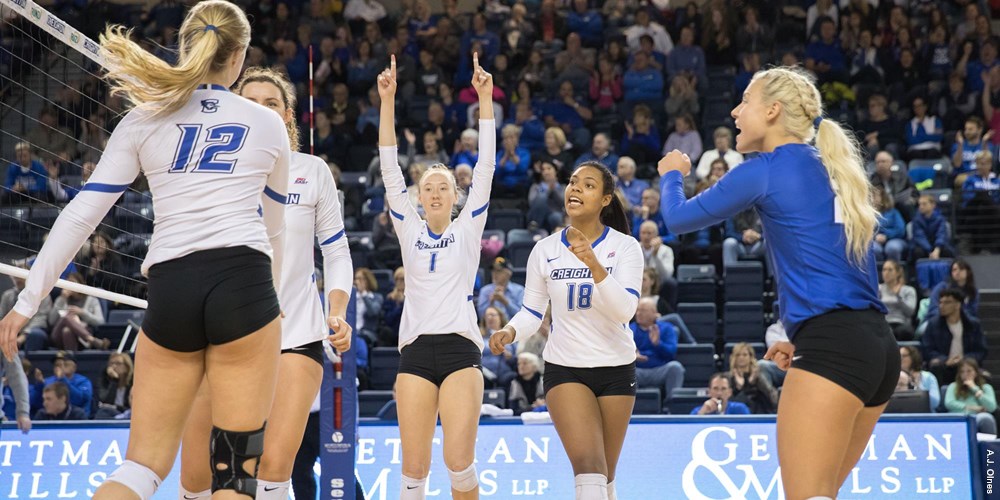 The No. 9 Creighton Volleyball team clinched at least a share of its fifth straight BIG EAST regular-season title with a 3-0 win over visiting Villanova on Sunday. Current Photo via Creighton Athletics

OMAHA, Neb. — The No. 9 Creighton Volleyball team clinched at least a share of its fifth straight BIG EAST regular-season title with a 3-0 win over visiting Villanova on Sunday, Nov. 11.

Creighton improved to 16-0 in BIG EAST play and 24-4 on season with its 16th consecutive victory. Villanova dropped into a three-way tie for fourth place in the BIG EAST with the loss, falling to 15-13 overall and 8-8 in league play.

Taryn Kloth had 14 kills and Jaali Winters added 12 kills and 10 digs to lead Creighton’s attack, while Madelyn Cole delivered her 10th double-double of the fall with 29 assists and a season-best 16 digs. Kari Zumach and Megan Ballenger each recorded five blocks. CU finished with 42 kills, seven aces, 53 digs and nine blocks on .230 hitting.

The first set would prove to be the closest of the day, as the Bluejays had to fend off a set point opportunity for Villanova at 25-24. The Wildcats trailed 23-18 before a 7-1 run to get to that point, but a serving error robbed the Wildcats of their chance to take a 1-0 lead in the match. Creighton would recover, converting its fifth set point opportunity on an error by star Villanova freshman Clare Delaplane. Kloth had five kills and Cole contributed eight assists and six digs to help CU take the first frame.

Cole served CU to a 7-0 lead to open the second set as the Bluejays never trailed. The lead grew to 15-5 and 20-7 before a kill from Winters handed CU a 2-0 lead headed to intermission. Cole had 10 assists and nine digs, and Kloth slammed six kills on 10 swings to help CU to the win. Creighton also had three blocks, limiting the Wildcats to just three kills and -.062 hitting.

In the finale, Creighton broke free from a 17-17 deadlock with three straight points on Naomi Hickman‘s serve to break free from the Wildcats. An ace from Cole, her third of the day, closed out the match. Six different women had a kill for Creighton in the third set, including four by Winters.

Creighton closes the regular-season next weekend with 7 p.m. matches against Providence on both Friday and Saturday at D.J. Sokol Arena.

NOTES: Jaali Winters claimed a share of her 81st school record, tying Marysa Wilkinson by playing in her 106th career victory … Winters now owns 1,770 career kills, eighth-most in BIG EAST history and four more than St. John’s Jackie Ahlers … Creighton improved to 7-0 all-time against Villanova in Omaha … Creighton clinched the No. 1 seed in the 2018 BIG EAST Championship, which it will host on Nov. 23-24. Creighton will play in the second semifinal, which starts at 4:30 p.m. … Creighton improved to 434-316 since restarting its program in 1994, winning its 750th contest played in that span … Creighton has won 60 straight over unranked teams when winning the first set … Creighton has won 77 straight vs. BIG EAST teams when winning set three and 75 in a row against BIG EAST foes when outdigging its opponent … Creighton has won 35 straight regular-season BIG EAST matches at home … Creighton improved to 21-1 all-time on BEDN … Jaali Winters had her 14th double-double of the fall. Her 56 career double-doubles rank tied for fifth in program history … Creighton is the first team to win five straight BIG EAST volleyball titles since Notre Dame won seven in a row (including shares) from 1999-2005. Creighton can be the first to win five consecutive outright titles with a win next weekend over Providence … Creighton’s only other team to win five straight league titles was its men’s soccer program, which won five titles in a row from 1992-96.

It is so easy to get caught up in the day to day of a season & not appreciate what this team has done the last 5 years. I’m in awe by them as athletes, love them, and those before them, as people. Thank you for letting me join you on this journey. #blessed https://t.co/6CLku3ZWQ3