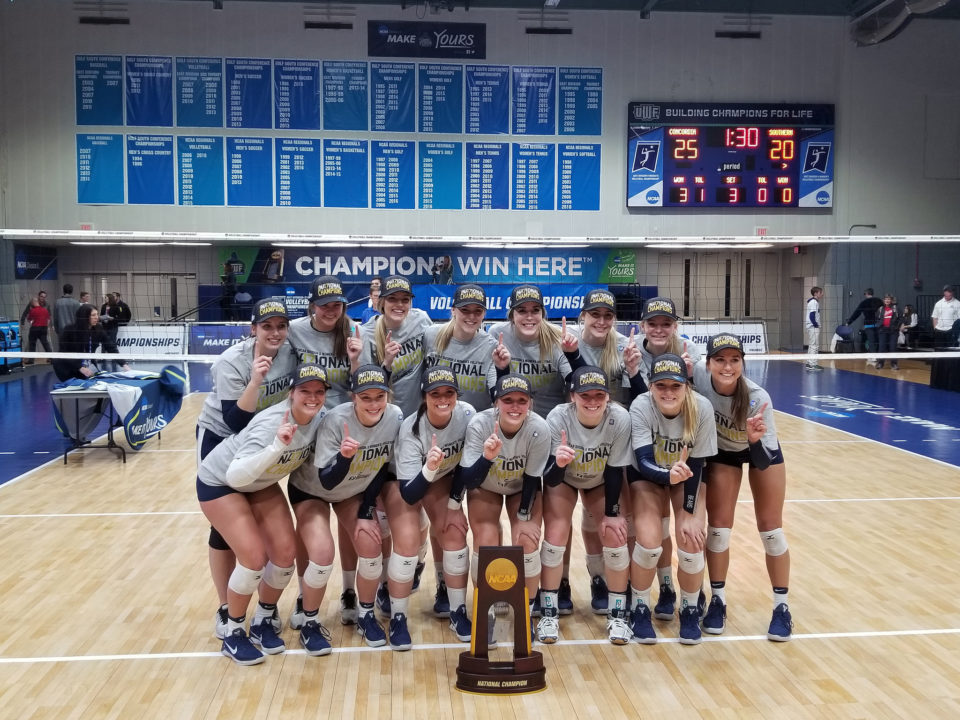 After knocking off Florida Southern 3-0 in last year’s NCAA Championship game, back-to-back Division II national champions Concordia-St. Paul in Minnesota open the 2018 season as near-unanimous #1s. The school has 9 all-time national titles, which are the most all-time in Division II, and just 1 behind Washington-St. Louis (D3) for the most NCAA titles in history.

The team returns Brooklyn Lewis at opposite/right side after last season she averaged 4.01 kills/set, which is the most by a CSP player since 2006. She’s part of a big group of returning players that includes 8 of the 11 who saw court time in the national championship season.

The only starters from last year’s national championship match that have graduated are middle blocker Shelby Seurer and outside hitter Mariya Sampson. The team will be among the most-experienced in the nation; they’ve only brought in one freshmen who is totally new to the program this season, 5’11” middle blocker Kennedy Brady, to go with 4 redshirt freshman that already have experience with the program.

The only other team with a #1 vote among 47 pollsters is Lewis University, though they still only rank 6th overall in the poll.

The team that the Golden Bears beat in that championship game, Florida Southern, checks in at #4. They entered last year’s NCAA Championship tournament ranked just #21 by the AVCA coaches, having only entered the top 25 for the first time in week 10 of the 13-week poll.

The Division III poll is expected to be announced on Tuesday.

15 teams mentioned on only one ballot for a total of 120 combined points.