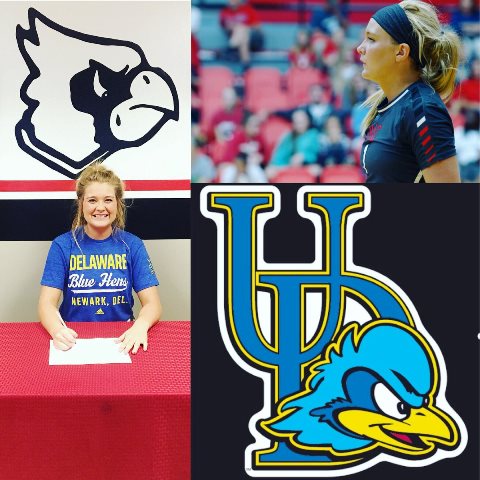 Delaware is bringing on a recruit/transfer from the junior college level in outside hitter Cailey Bracken out of Mineral Area College. A 5’10” pin, Bracken will be a junior in the fall with two years left of play. She is also immediately eligible as a junior college transfer.

In one of the team’s NJCAA Tournament matches, she logged 21 kills and 15 digs. The performance combined with the other matches pushed her onto the 13-player NJCAA All-Tournament Team.

A native of St. Louis, Missouri, Bracken attended Bishop DuBourg High School for her prep years. She was a four year letterwinner in which she earned All-Conference honors each season as well as All-District.

“When I saw Cailey competing at JuCo Nationals, I knew she was a player who would help our gym,” Delaware head coach Sara Matthews said in the team’s release of the addition. “She has great ball control and can effectively also put balls away in and out of system. She is the type of player you want in the trenches with you in a close match. She has an infectious personality that pushes people around her. We are really excited for what she will bring to our team and gives us some much-needed depth on the outside.”

Bracken joins a team with three other outside hitters on the roster. The Blue Hens finished the season at 5-21 overall and 3-13 as a member of the Colonial Athletic Association (CAA).

Our next player is @caileybracken, a St. Lous, Mo. native who was an honorable mention All-American while playing the last two years at Mineral Area College. pic.twitter.com/wjhr6NNvgx