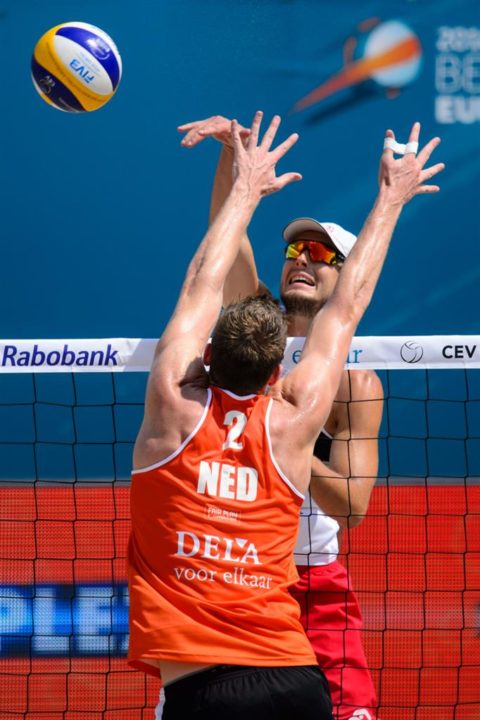 A big reason for the success of Dutch duo Christian Varenhorst/Jasper Bouter is the blocking of the 6-foot-11 Varenhorst. At the CEV Championships, the 28-year old discussed the skill. Current Photo via CEV

A big reason for their success is the blocking of the 6-foot-11 Varenhorst. At the CEV Championships, the 28-year old discussed his the skill.

“It is quite a mental game: trying to anticipate what the opponent is going to do, what am I showing?…” Varenhorst said. “Sometimes I step left and block right or the other way around. Sometimes you step early and block late. There are all kinds of different tricks. For every blocker there is a different strategy. I am just one blocker trying to figure out a new way to block these attackers.”

He went on to say that teamwork with his partner is a big factor in his blocking.

Next up for Varenhorst/Bouter is the Vienna Major from July 30 to August 5. The duo finished ninth in Gstaad on July 15 and 25th at the Fort Lauderdale Major in March.

Varenhorst finished fourth at the World Championships in Vienna last August alongside Maarten van Garderen after the pair earned a wildcard entry.