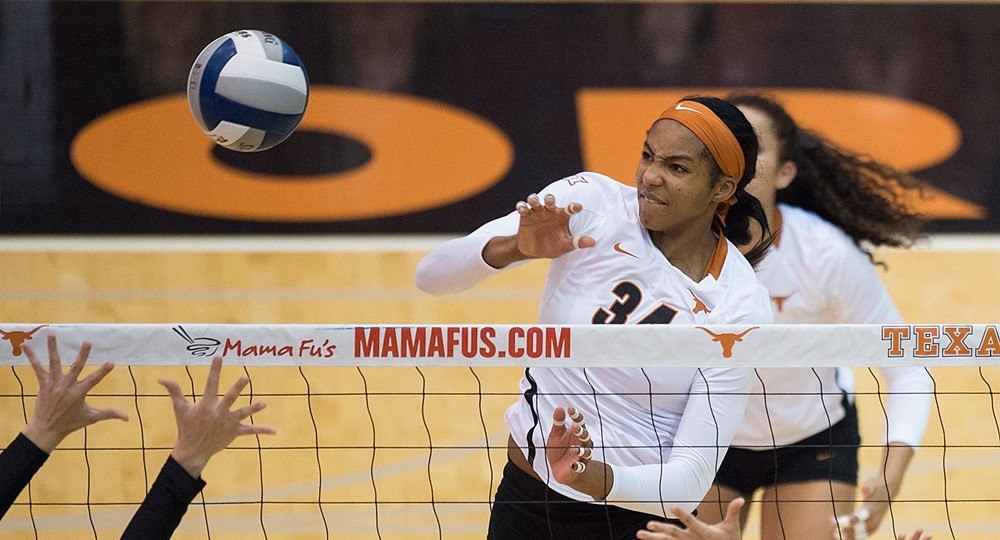 The Texas women had a little hiccup at the beginning of their Big 12 opener on the road in West Virginia on Tuesday evening, dropping the first set to the Mountaineers 26-24 – perhaps a mental hangover from their crushing defeat to the Wisconsin Badgers on Sunday.

The Longhorns’ play improved in ever set, however, and after dropping the first one, they took the 2nd, and looked back on form as the #5 team in the country by the 3rd and 4th deciding frames. That includes an error-free attack in the closing set.

Texas was also stout defensively, recording 3 solo blocks and a whopping 28 block assists on the game for 17 total team blocks – or 4.25/set. West Virginia, alternatively, only had 4 total team blocks. Freshman Orie Agbaji led the Longhorns in blocks with 9 total – a career high and the most of any Longhorn this season.

While the Mountaineers eventually ran out of steam against Texas, unable to apply enough defensive pressure at the net in the 3rd and 4th sets, they did actually record more kills than the Longhorns in the match (62-57). That includes superstar freshman Payton Caffrey, the reigning Big 12 Rookie of the Week, who scored a whopping 26 kills on .259 hitting.

The Mountaineers have leaned heavily on Caffrey all season, and she has responded with more kills-per-set than any freshman in the country, and ranks second in total attacks by a freshman nationally as well. With 9 digs, she came up just short of recording her second double-double of the season.

Texas too was led by a freshman in scoring in this match – Micaya White recorded 18 spikes at a .260 hitting percentage – one of three Longhorns in double figures alongside junior Ebony Nwanebu (13 kills, .429) and senior Paulina Prieto Cerame (15 kills, .419).

While Caffrey had the biggest numbers, her West Virginia teammate Erin Slinde had the highest average – hitting .545 on 7 kills with 19 assists to boot.

Freshman Orie Agbaji led the Longhorns with a career-high nine blocks, the most of any Texas player so far this season. She also added three kills on four attempts.

Three Longhorns finished with double-digit kills, all hitting .260 or better.

In the first set, neither team led by more than two until the Mountaineers went on a 6-0 run to take an 8-4 lead, but the Longhorns chipped away, winning six of the next eight points and tied the score at 10. West Virginia went on another 3-0 run to take a 16-13 lead later in the set, but could not pull away and Texas tied it again at 18. They tied three more times before the Longhorns saved three set points, but the Mountaineers closed in on the fourth to take set one, 26-24.

Neither team led by more than two in the second set, featuring 12 ties early, until West Virginia took an 18-16 lead. Texas responded and tied it at 20, but the Mountaineers took another lead, 22-21. Back-to-back kills from White gave the Longhorns the advantage, but neither team could pull away until Texas closed the set, 28-26, to even the score, 1-1.

The third set picked up where the second set left off with six ties until the 7-7 mark when the Longhorns went on a 4-0 run to lead, 11-7. UT maintained the lead and extended it for a 21-15 advantage. From there, Texas finished with another 4-2 run to close set three, 25-18.

In the fourth set, the Longhorns jumped out to a 4-1 lead and stretched it to 11-5.  The Mountaineers could not close the gap, pulling to within five at 10-15, but Texas responded to increase the lead and finished the match with a 25-15 fourth set.

The Longhorns will return to Gregory Gym to welcome No. 8 Kansas on Saturday, Sept. 24 at 7 p.m. The match will be televised live on Longhorn Network.

MORGANTOWN, W.Va. – After taking the first set, the West Virginia University volleyball team was unable to capitalize on the early momentum and dropped its Big 12 opener, 3-1 to the No. 5 Texas Longhorns at the WVU Coliseum in Morgantown on Tuesday. WVU (8-6, 0-1) fell to Texas (9-2) in set scores of 26-24, 26-28, 18-25 and 15-25.
“I thought we did some nice things,” said second-year head coach Reed Sunahara. “Texas is ranked No. 5 in the country for a reason. They really put pressure on us, and we need to learn how to respond to that.”
Reigning Big 12 Rookie of the Week Payton Caffrey just missed double-double No. 8 of the season, netting a team-high 23 kills and nine digs. She hit .259 in the match. Katelyn Evans hit .250 with 11 kills and a trio of digs, while Natania Levak had eight kills. Erin Slinde hit a team-best .545 with seven kills and 19 assists.
Slinde also led the blocking effort with four block assists, while Big 12 Defensive Player of the Week Mia Swaneganfinished with three. Swanegan also chipped in six kills.
Haley Roe assisted on 29 of WVU’s 62 kills, adding seven digs as well. Gianna Gotterba boasted a team-high 14 digs in the match, followed by Taylor Cross with 13. Gotterba had one of the team’s three aces, while Caffrey recorded the remaining two.
West Virginia hit .172 with 4.0 team blocks in the loss.
Behind seven kills from Caffrey, West Virginia topped Texas, 26-24, in the first set. A pair of Caffrey aces bookended back-to-back blocks by the duo of Swanegan and Slinde for a 6-0 Mountaineer run that put them ahead 8-4 in the set. The Longhorns took three straight to later tie the set at 10-10 before consecutive Caffrey kills once again put WVU on top, 15-13. Texas came back to even the score at 20-20, 22-22 and again at 24-24 before Caffrey found the court to bring up set-point, where a Longhorn attacking error gave West Virginia the win.
The Mountaineers hit .227 in the second set, but despite their best efforts, couldn’t pull out the victory. WVU and UT traded early scoring runs to a 5-5 tie, keeping it close for most of the set. A UT service error and a Caffrey kill put the Mountaineers up 18-16, forcing Texas into a timeout. The Longhorns came out of the stoppage to take a 21-20 advantage, as WVU used its second timeout of the set. With Texas at set point, Caffrey extended the set on a kill before a UT hitting error made it set point for West Virginia. Following a timeout, the Longhorns scored four of the last five points to take the set, 26-28, on a service ace to tie the match 1-1.
The Longhorns capitalized on several early hitting errors by the Mountaineers for a 6-4 lead. Another 4-0 run made it 11-7 on a Longhorn kill before Evans, Caffrey and Levak each recorded kills to bring WVU within two, down 14-12. Back-to-back attacking errors on WVU pushed the Texas advantage to five at 18-13, and the Longhorns never look back, taking the set 25-18 for a 2-1 lead in the match.
Texas rattled off four in a row for a 4-1 lead in set three before a 5-0 run withstood a WVU timeout for an 11-5 lead before a kill from Evans ended the streak. Caffrey put down a pair of kills and Slinde added one to keep the Mountaineers within five, down 18-13, but four in a row for UT put the score at 22-13, and the Longhorns put the set away with a kill, taking a 25-15 win for the 3-1 victory in the match.
Micaya White had 18 kills for the Longhorns, who hit .344 in the match. Orie Agbaji had eight blocks as UT posted 17.0 team blocks.
West Virginia heads out on its first Big 12 road trip this weekend, traveling to Lubbock, Texas, for a 2 p.m. ET tilt with Texas Tech on Saturday.