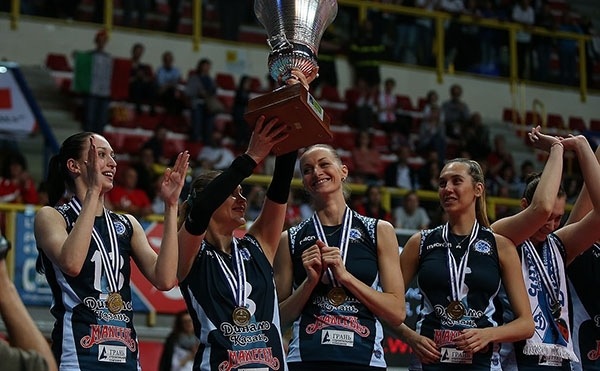 Dinamo Kazan was selected as the European Cup winners, in spite of finishing just 4th in the Champions League. Archive Photo via Dinamo Kazan

Dinamo Kazan has been confirmed as the 8th team for the 2017 FIVB Club World Championships, which will be played from May 8th-14th in Kobe, Japan.

The FIVB had previously announced the 4 wildcards for the annual tournament that pits together the best club teams in the world. However, by virtue of VakifBank Istanbul’s title in the event (they were one of the 4 wildcards), a spot opened up.

That place was awarded to Dinamo Moscow, who are in the midst of a Russian title chase after finishing 4th in a lackluster Champions League performance.

They received the spot over Italy’s Imoco Volley Conegliano, in spite of Imoco taking a silver medal in last week’s Champions League final.

The decision means that after Pomi Casalmaggiore’s silver medal at last year’s World Championships, there will be no Italian side in the tournament. Instead, Russia will avoid a second-straight no-show.